Domesticity, Other Stuff, and SYFY Tip #4

I am not feeling the Blogger love this evening. Not one bit. First, I noticed last night that when I uploaded several photos at one time, they posted in reverse order. Hmmm. It just happened again, so I think this is one of the many surprise changes that have been encountered in Bloggerland the past few days. The other one was when I tried to post a comment to June's blog this morning and I encountered some crankiness, and not just my own! The darn comment feature had been updated, and it was not happy. I did some research, as is my nature, and I read that this morning Blogger implemented their Beta in-line commenting feature. Boy, what a mess. So as tech-savvy as I sometimes profess to be, I unhooked that baby from my own blog and set it back to the old pop-up window. Ptthhhht!

Domesticity. This used to be one of my stong suits, but not so much any more. I just seems like so much work. But sometimes you've gotta do what you've gotta do. This weekend we are having our annual end-of-the-season Pot Luck at the market, so of course this involves cooking. I agreed to bring BBQ meatballs because (1) they were a hit last year, and (2) I do not have to cook them until I plug in the crock pot at the market Saturday morning. I did have to stop at the store on my way home from my massaaaaage tonight and purchase the frozen meatballs, but that's all the work I had to do. I've already bought the other ingredients, so all I'll need to do is remember to grab everything Saturday morning. Wish me luck with that one...

But wait, there's more! I cooked a pumpkin last weekend and I wanted to make this sinfull cake for Saturday, too. So I cleared off enough of the counter top to make room for my large mixing bowl and the hand mixer, and I made it. The cake is cooling on the stove as I type, and it smells quite yummy in here.

After I put the cake in the oven I took out several dozen eggs I have collected from my CSA shares (how many eggs can one human consume, after all!?!?!) and boiled them up. They are destined to be Deviled Eggs if I get to them tomorrow evening.

Ack - I am in domestic overload!!!! So I decided to do one more thing for Saturday...I made a baby card. You see, we are also having a surprise baby shower for one of the vendors who is very pregnant and due in December. And me, being a card-maker, would be so embarrassed if I did not make a card. I tried tonight, and I failed. This is one reason my Baby section is a little thin. How can you make an irreverant baby card?!?!? Well, I did see one somewhere that was downright insulting, but we won't go there right now. Let's take a look at my lame attempt at the card.

First, since she does know it is a boy, that part was decided for me, so I went in search of baby blue. I have textured white card stock. I found textured light blue card stock. I have baby ribbon that I finally get to use. And somehow I wanted to include the slot punch for tying the ribbon. Do not ask me why, it was just in my brain at the time. So I set in with my supplies and my remaining 6" square workspace to make this card.

Welcome to SYFY Tip #4. I am totally worthless sometimes. Check out my scored blue card stock:

I could not even get the edges to meet. Sigh. But all was not lost! I pulled out my trusty Scalloped Edge punch and I made it look like I meant to do that:

Ta da! Nice save, huh? I think I should have stopped there, because this is what came out, and I am not liking it very much: 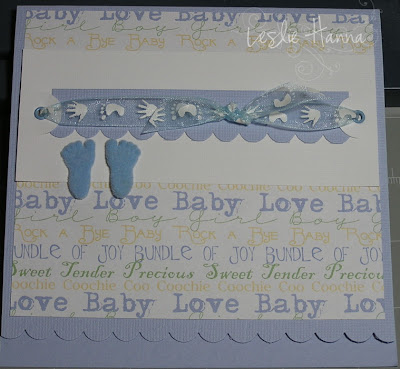 I do not like the white strip. I do not like the slit punches and how I tied the ribbon. The only thing I like about this card are the fuzzy feet brads that I picked up at Angela's last weekend. And I guess the paper is pretty neat, especially since I have had it for five years and finally thought to use it; plus it is a pretty good match for the blue card stock. I really do not think my original idea of using that slot punch and baby ribbon were very well executed here. I may remake this - heck, I have all of tomorrow evening! LOTS of time.

On a sad note (as if that card wasn't sad enough), not only did the Dahlia Guy miss last weekend's market, but when I emailed our coordinator at the City and told her I was in withdrawl, and to please forward my whine to the Dahlia Guy, and then the Dahlia Guy called me, he was calling to say we had a frost and the blooms are toast and the season is over. Say it ain't so!!!! But it is, so no more pretty flowers until next summer.

Well, there's cake to cover and eggs to peel, and the cat is telling me it is past our bed time, so that's enough whining for one evening. I bid you good night.