I have seen many variations of this Frankie-out-of-the-Top-Note-Die theme, so tonight I decided to get it out of my system and try one, especially since my SU Top Note Die arrived yesterday. (yay!)

Here is the finished product, which was largely CASEd from here. 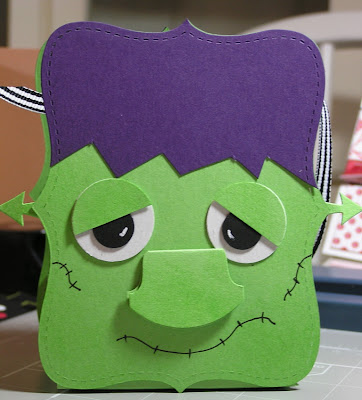 I, naturally, had to make it my own. I won't bore you with the step-by-step, since I did that to death in my last post; plus Cambria (from the link above) did a fantastic job of doing that already, as she usually does. If you have questions about how to construct the box, she has measurements plus the link to the original in her post. I will show you what I changed from her design, though.

Cambria scalloped the edge of the inside piece and then punched a slot punch through which she slipped a ribbon to tie the box together. I did the same thing, but instead of a loose ribbon, I opted to slip it through the slot as I built the box: 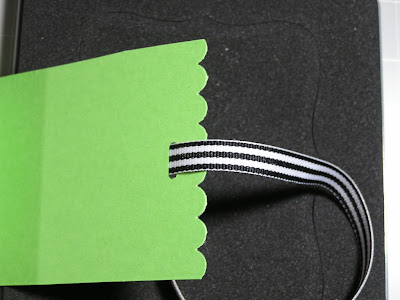 then anchor it to the inside of the flap, thus(ly): 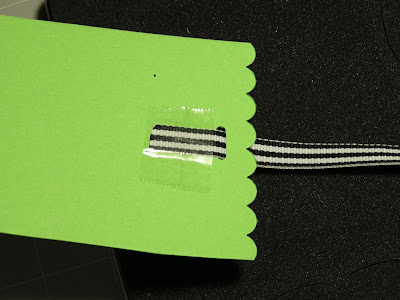 Then when I stuck the inside flap to one of the die-cuts, the ribbon was stuck real good. I did this on both sides. 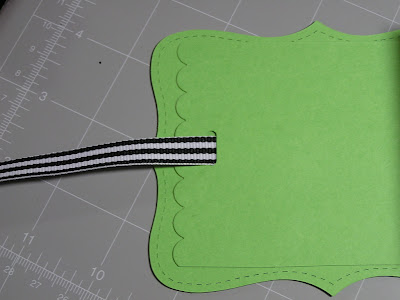 This is what the inside of my finished box looks like:

Keep that photo in mind, as we'll come back to it shortly. Next, let's look at the side of the box:

I know a good thing when I see it, so I also CASEd the idea of scalloping the edge of the side of the box before I stuck it together. That's just a single punch with the SU Scallop Edge punch. Nice touch, huh?

Now here is where we get options. I left the flaps of the box loose, as in 'not stuck to the center box part'. Look back at that box 'inside' a few shots up and you'll see what I am talking about. Those long flaps? That's what I am talking about. Once you have done all the assembly, there is really no reason you cannot stick the flaps to the box sides, and then you will not need a closure element (the ribbon) to hold it closed. But since I was CASEing, I included the ribbon.

Also note I used some of my Peppermint Patties for the treat, since I am afraid to buy any candy corn as I will consume it before I get it home. It is just easier to not buy it at all. But if I did have some, that would be way cool to put into cellophane bags for the side view.

The center box holds whatever you want to put into it. It could be a gift of some type, or just straight-up sweets. If you have stuck the flaps to the center box, you are done. If you used the ribbon option like I did, you tie them together, then you are done. Either way - easy peasy. (My side-view photo above has the ribbon loosely tied, just to confuse you.)

And in case you were wondering, here's the back: 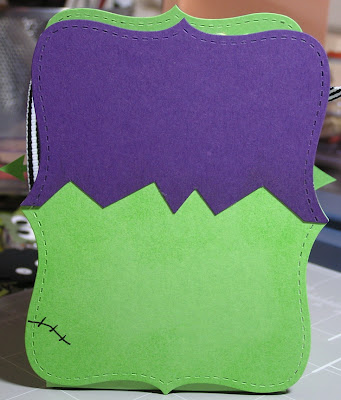 As is my mode of operation, I now have this little project out of my system, and I have no plans to make any more. Not even to sell. Why? Because, if I made them and no one bought them, then what? I'd have to store them until next year, or give them away, and that sounds like work, so I've opted to not make them at all. See, my work here is now done.

Although ... I wonder how long it will take someone to make up a Santa version. Oh, well, I need to get back to my diversion du jour, which I plan to show you tomorrow. Thanks for stopping by!

Edited to add: You know, I'll bet you could stick the Frankie front & back to small paper bags and skip that whole box construction step. Ooooh, how about lumieres, like lined up along your driveway? Oh, the possibilities....