It all started innocently enough on Sunday. I thought I'd go through the three+ boxes of stuff from SU I have piling up in here and take stock of what I forgot I had. The good news is I got it mostly down to one box. (yay) The bad news is I have an embarrassingly LARGE amount of stuff that I actually did forget I had. I decided to put away as much as I could, since The Other Room really does not have the space, which is why it was piling up in the Living Room in the first place. Wanna see the "after"?

Here we have a stack o' card stock: 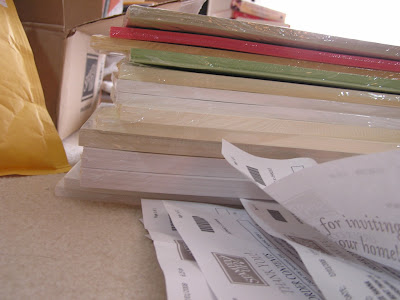 Mostly Whisper White and Very Vanilla. One can never have too much White or Vanilla card stock. Well, maybe one can. You see, when I place a Demo order, I try to hit $150 to get some free stuff. Yes, I do the math, albeit Demo Math, but I will not take an order from $120 to $150 to get a free set I do not want. The numbers just don't work for me. So you see, I do have some level of restraint. ;-) So ANYway, for the times when I do hit $150 and get $15 in free merchandise, guess what? A pack of WW or VV card stock is $7.50, and twice that is an even $15.00. No muss, no fuss, no MATH. So I am not too surprised to have this much on hand, but I was a little surprised that I had ordered that much of it recently. I did put it away, mostly.

Next we have a pile o' adhesives, which I also try to use as order fillers: 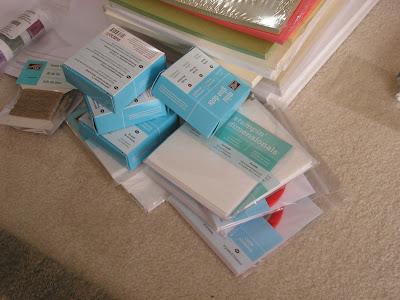 We do go through a lot of Dimensionals and Glue Dots at my workshops, so I need a bunch on hand. And that Red Tape is (was) for a workshop project I never got to, but if I ever DO, I am READY!

Next we have the really embarrassing part - DS paper: 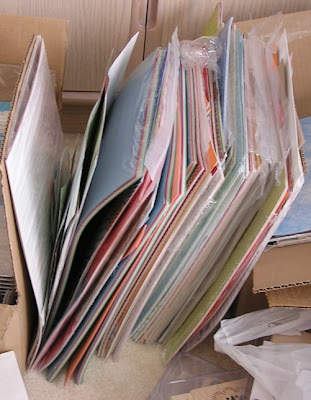 This is some from the retiring stuff from July & August that I stockpiled because I loved it, but mostly from the new catalog (read: since August). Ugh. I had forgotten I had some of it, which is not hard to do considering how much of it I have. I do have two or three packs of some of the patterns (I think for two of the papers) as I'd planned to use it for ... a workshop project that just never happened. You see, when I DO think up projects, it is usually the week before the workshops, and there would never be time to order the extra papers and get them in time. Soooo, when I think about it, I order three of something I like, with plans to use it. It's just the "using it" part that fails me.

And when it was all done, I was left with this partial box o' stuff: 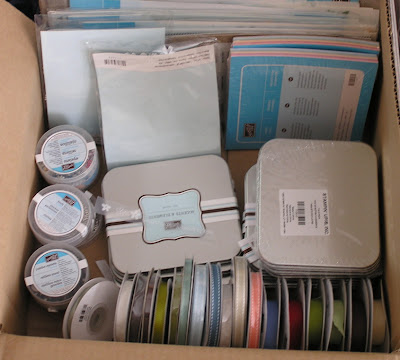 There is a stack of Rub-ons there in the back, some of them from as far back as SAB. I have no repository in The Other Room for rub-ons, so here they languish. I also have some ribbon (surprise!), and several containers of Jumbo eyelets, um, from another planned-and-never-executed workshop project.

Oh, and that 3-pack of tins on the right side of the box? That was for an idea I had to use up some of the retired 3x3 Love Notes I have left over. I was going to make some number of Love Notes, all decorated nicely, and put them in the tins with a fancy, schmancy belly band and sell them at my holiday craft shows (all 2 of them this year.) But the tins cost $3.33 each, so I am not sure I'll be able to make any money on them, so I never pursued the project.

Ya know, if I could ever remember all these great ideas I have over the course of the year, I might have my next workshops' projects all planned out. HA HA HA HA HA! Oh, that's too funny. I crack myself up sometimes.

To celebrate the consolidation of all that stuff, I took out the pack of SU Chipboard Ornaments Kit I'd bought in a Good Demo moment and decided to assemble them. Many, many, many (many) hours later, I had made these: 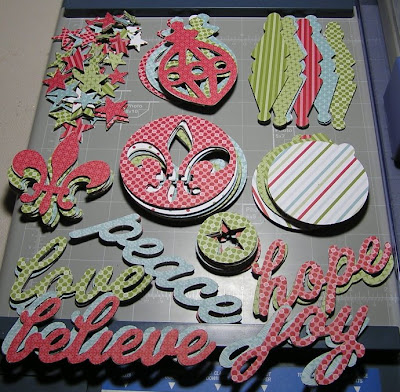 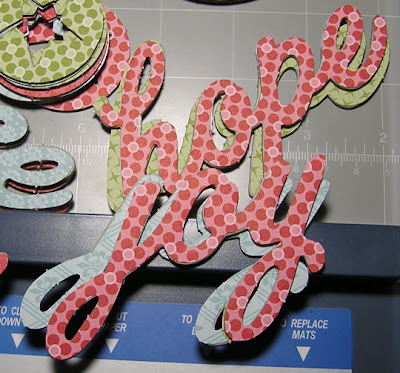 And some more words, and some round things with star punch-outs in the middle: 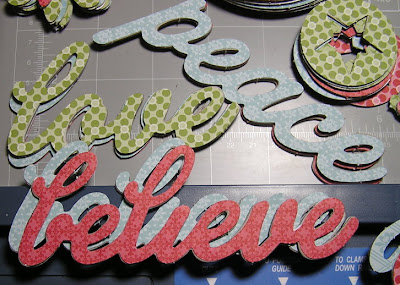 And some plain ornament shapes: 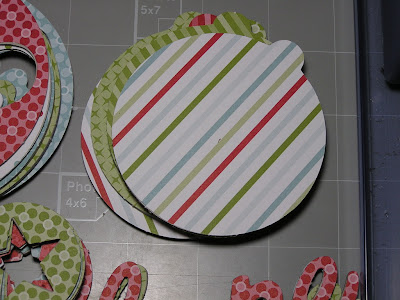 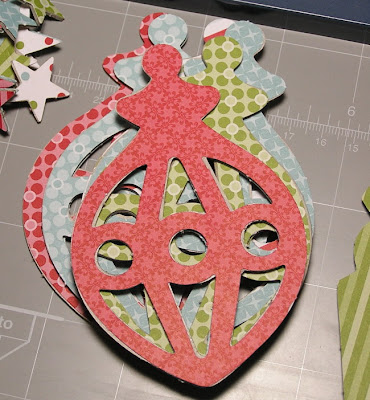 And some long thingies: 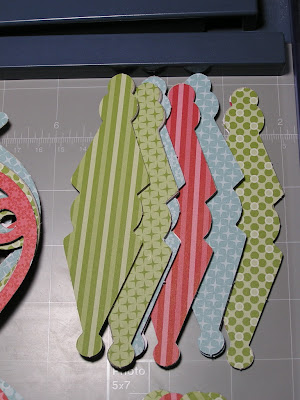 And some Fleur de Lis (outers): 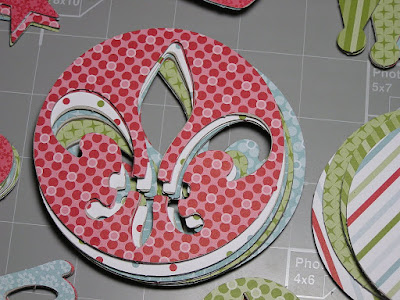 And some Fleur de Lis (inners): 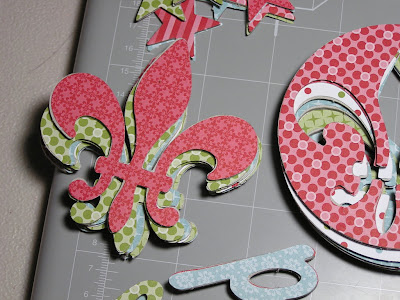 And one heck of a lot of stars: 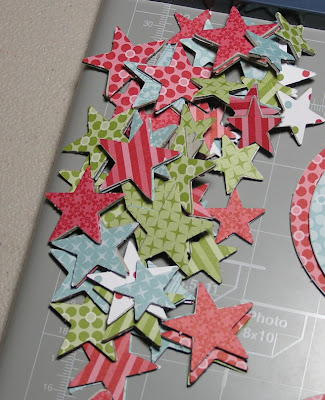 Phew! Man, oh man, but that's a lotta chipboard ornament parts! Unfinished chipboard ornament parts, in my case, because I stopped right there and put it all away. You see, I do not "do" Christmas, so I will never, ever use these things. But I can tell you, if you do Christmas, and you like to decorate your house and your tree and maybe even your packages with pretty things, and if you were to take these babies to the next level and make them pretty with glitter and some of those stars and some, oh, I dunno, ribbon, then punch holes in the tops so you can hang them easily, this would be one good deal. But not for me. I think I'll give them to my customers and maybe they can make something of them.

And if you are still reading (amazing ...), there is one more thing. You see, we (yes we) hit a new milestone in Blogland last week. Lookie:

Woo-hoo! You did it again! And to thank you (and I DO thank you!), I am having a real G-I-V-E-A-W-A-Y! By "real", I mean not some s-crap from The Other Room. No, siree! This is something from my Kitchen floor! Yes, I have overflow everywhere. Several months ago I bought these: 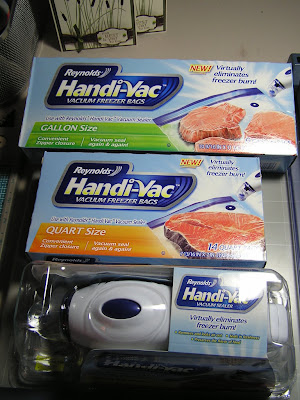 I had this idea that since I do not cook a lot, but when I do, I make a normal recipe, meaning I have a lot of left-overs, I thought I might prolong the life of these left-overs with a vacuum seal system. Needless to say that all never happened; I had to take these out of the bag to photograph them.

Here is the main attraction: 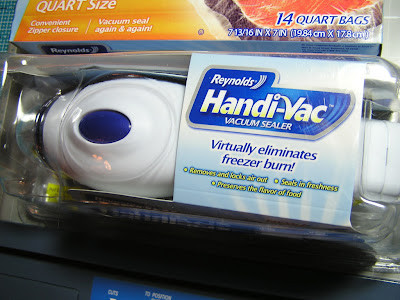 And this starter kit includes: 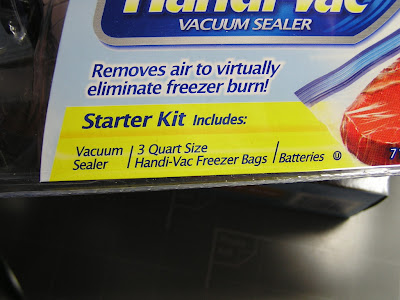 Plus a box of Quart and Gallon bags. Hey, when I shop, I shop, okay?
So, do you want to win these goodies? Yeah? Do I hear a YEAH, BABY!? Well, to win these, all you have to do is tell me why YOU deserve to win them over everyone else. That would be why YOU, one of my three (maybe four) beloved readers, is so much more deserving than the others. Got a sad story? Do tell! Do you cook a lot and hunker down for a long, cold, Winter, living off only the food you are able to preserve in your root cellar? Then tell us all about it!

So spill your sob story as a comment on this post before Sunday noon, and I'll pick a winner based on some as-yet-undecided non-scientific method.

See, good things can happen to you here in cyberspace! Comment on!!!!!! I cannot wait to read your answers! ;-)