Yes, once again I am distracted. Maybe I should just accept that as my going-in position every day and not be too surprised.

Last night I actually checked something off my list. I made six Bar/Bat Mitzvah cards like this one: 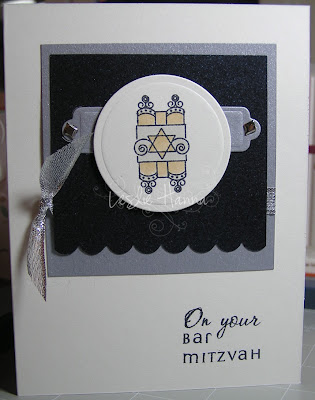 These were done the same as the last batch I made, but I opted for the easy way out this time and just stamped the sentiments in Memento Black instead of trying to emboss it. It went much better!

So what prompted me to actually accomplish something? Well, just before I made the cards, I inventoried these little lovelies that were waiting for me when I got home: 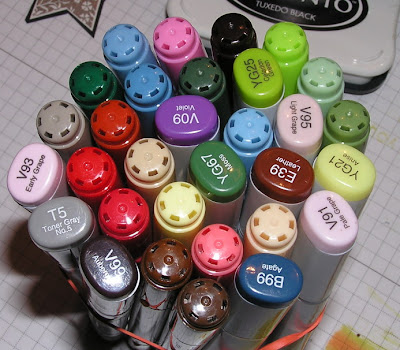 So all that stamping was the result of deep, deep guilt. But hey, whatever works, right?

Tonight I'd planned on finishing the Halloween cards I started a few weeks ago, but alas, I did some catch-up reading in my Maxine calendar at work and found a sentiment that just screamed to be used on a card. After I got home this evening, I made this: 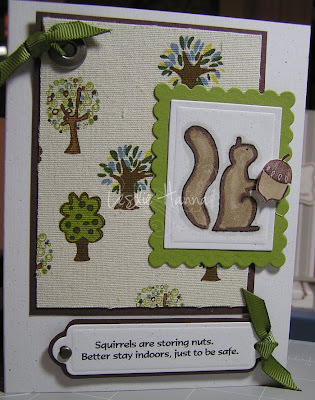 Yes, there is a lot going on here, and it only took me an hour to get to this layout. I printed the sentiment on the computer, several times, and I finally got it in a font size that I could still see and where the whole saying would fit in one of my Nestabilities tag dies. I knew I wanted to use this squirrel and nut pair of stamps, but I'd forgotten the little guy was looking to the right. It did cause some layout issues, at least for me it did.

The trees are actually some fabric paper that has a sticky backing. It is to die for, and I have been afraid to cut into it until now. I cut it in a size that would maximize the amount I could get out of the 12x12 sheet, but then I had the challenge of getting it all to fit on the A2 card while at the same time letting most of the lovely fabric show (not get covered up.) What? Use a different size card base!?! Wha!?!?! I cannot heeeeear you ..........

The Jumbo eyelet in the upper left corner is there for several reasons. One - there was a big empty up there, and it just needed something. Two - I needed to balance the squirrel image plus the tag on the bottom. Um, let's talk about that tag for a moment, shall we?

Do you see anything weird about this? Like how crooked I cut the brown layer around the end of the tag die? 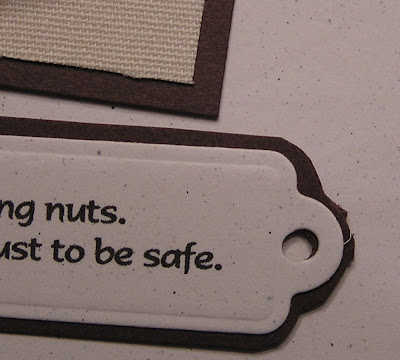 I decided to save myself (this would be the SYFY Tip #4) by ... tying a piece of ribbon through the hole instead of putting a brad there, thus covering up the grievous boo-boo. So that's why I also tied a piece of the same ribbon in the Jumbo eyelet. See, balance.

So yeah, a lot going on, but I still like it. Didja notice I used some Copics to color the squirrel? I might put some brown flocking on the tail. Too much? I'll see how I feel before I put these guys into their clear sleeves.

I took tomorrow off from work to take care of "things"...those tasks that just need to be done between the hours of 9 and 5, Monday through Friday. Pesky Day Job! Hopefully after I get to all the other stuff, I'll have some time to stamp!