Sunday was a stay-home day for me for a change. I did laundry, I stamped, I cleaned something, I cleaned stamps, I stamped, I had breakfast, I stamped. It was a nice, easy rhythm. I thought about going out to get a postage scale, but that meant I'd have to put on shoes, so I opted to not go.

I was talking with June on Saturday about selling cards in coffee shops, when it hit me: Duuuuh! I have like a gazillion coffee-themed stamps. Okay, maybe only 4 or 5, but that's a lot when you never use them. So I got them out, and I also got out some card stock from The Stash and cut it up. I stamped, I cut, I trimmed, I color-matched to the best of my ability, and I made this: 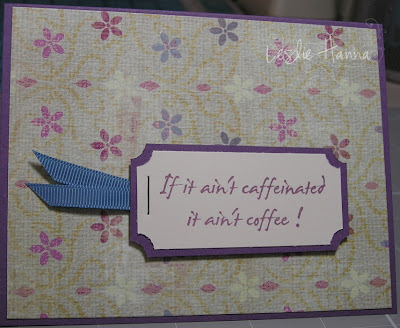 I think the sentiment speaks for itself, and needs to be the star, so I did not bother with a lot of other stuff on the card. Here's the same sentiment on the second background I used: 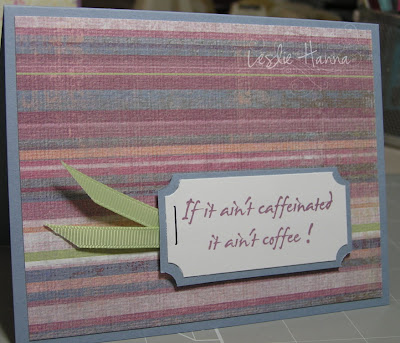 And here are the other three sentiments: 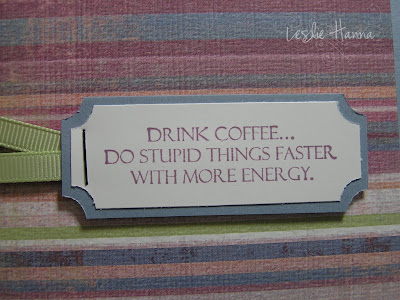 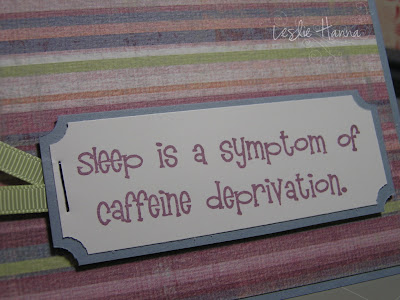 I also picked up two sheets of coffee-themed paper at Angela's, so I'll use those eventually, too, but probably as Birthday or Thank You cards since I would not want to over-do that whole coffee thing, ya know?

Moving on ...One day late last week I pulled out some more of that pretty patterned card stock I have, and I just could not get inspired as to how to best use it. So it sat there and I glanced at it every so often. Then I got a clue on Sunday and I made two of this card: 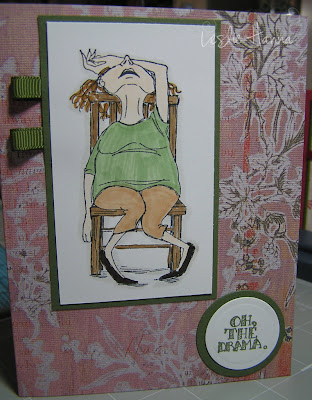 Yep! She's great! I used a new sentiment I got on Saturday because I just knew I could use it with this lady image. I think it turned out nice! Isn't that textured card stock pretty?

I also made a few more with the lady and the original sentiment (my one card sold on Saturday) using some of the extra pieces of these papers, because I wanted no pieces left over! 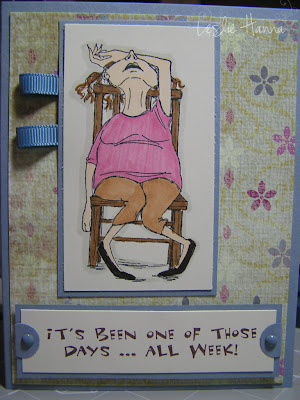 Do you see how her shirt looks striped? That means you can see the brush strokes of the Copic marker. I've read these alcohol markers are better than the dye ink ones because they do not leave a trail, but apparently they do for me. Bummer. I was afraid to go back and blend since I did not want it to come out too dark. I'm sure I'll figure it out one of these days. For now I say she is wearing a rib-knit shirt.

I tried to use the sentiment (Happy Engagement), but no matter what I tried it looked bad. Plain ink, embossed, nothing worked to my satisfaction. I ended up switching to some Stamp A-Peel stickers I have had forEver, so between the stickers and the miscellaneous card stock I used for the bases, I made a pretty decent nick in the ole Stash. Here's the first card I made: 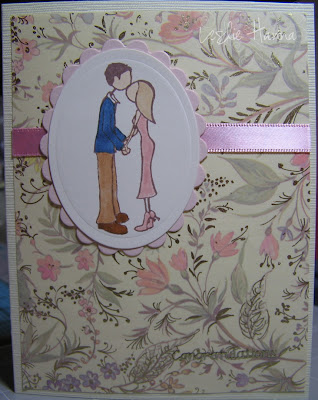 Can't see the sentiment? That's because I stuck it directly onto the busy patterned paper and it got lost. Look: 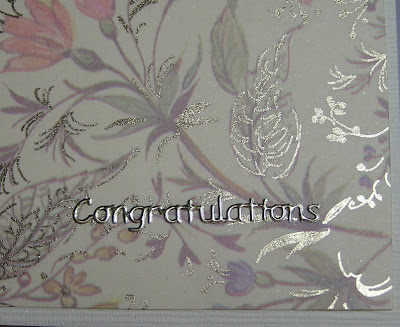 Also note the pretty gold accents in the paper. LOVE it! So I opted to put the sentiment on some Very Vanilla instead and punched it out with the SU Word Window punch (it was a perfect fit!) Here is another version of the card with the sentiment on Vanilla and this one has a grey card base: 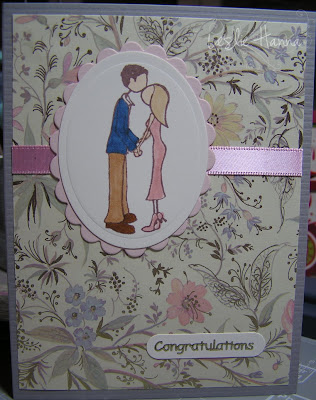 Here's the sentiment up close and personal: 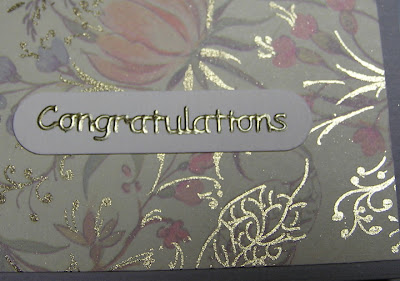 I made all the rest like that second one, and I went back and carefully removed the sticker from the first card and remounted it.

I thought about the guy's blazer and slacks - maybe it is too dark? What do you think about a nice medium grey pinstripe suit? I can easily stamp him on a scrap, color him and cut out the suit to paper piece. I don't get out much, so I'll take any feedback you care to give me on this one.

Ach, now it is bed time again. Catch ya later!