Before I explain that title, let me just say I did add flocking to the squirrels' tails and I really like it: 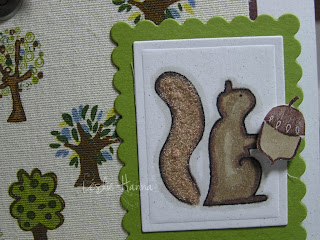 Here you can get a good look at the fuzzy tail and also that fabric 'paper' - so yummy! Please pay no attention to the bad Copic coloring. Lots of things look better from afar.

So I spent today running errands, and I did about half of what I'd planned. I hate when that happens. I did find time to SPAM my customers about next weekend's workshops, which put me into my usual OMG-I-have-one-week-left mode, and I made a vailiant effort to finish my Halloween cards so I did not have to include them in the Clean Sweep.

That's when it happened. I counted. I had more stamped images than I had punched witches. What did this mean? It meant my attempt to just make more of the same cards I'd mocked up several weeks ago just failed before it had begun. I had too few witches!!!!! Now I needed to get creative, and I was not in a mood to do so. I wanted mindless repetition, and it was not to be had!

So I raided the embellishments, and it was good. Let's review. 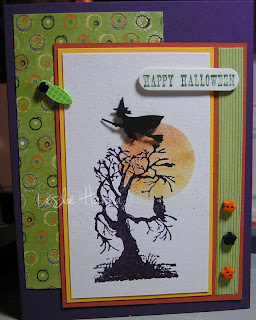 First we have one card with a witch. But I'd also run short on orange photo brad thingies, so I added some green ones to my pile, and I only used one per card instead of two, which opened up that right side to needing something. That something became a small bag of tiny buttons from The Button Corner of one of my drawers. At least I stuck with black and orange.

On this one I left too much room at the top, so I punched the sentiment out with the Word Window punch and had it overlap into the green. 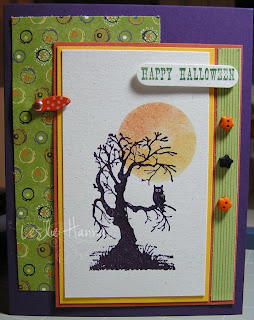 This version has no witch ;-( and I moved the buttons up a little, just for variety. 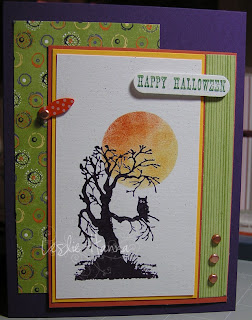 Before I broke out the buttons, I tried some copper brads. Eh? Not so crazy about them, which is why I switched to the buttons.

I ended up with 15 Halloween cards total, which is not too shabby for an evening's work. Though I did cheat and had all the stamping done; all I needed to do was the measuring and layering and cutting and assembly.

I'm off to put a piece of white paper inside each of those cards and slip them into sleeves for tomorrow's market. I'll let you know if I sell any!
Posted by Leslie Hanna at 9:15 PM