The Big Reveal, and a Little Stamping

First, The Big Reveal for What Is This (besides out of focus): 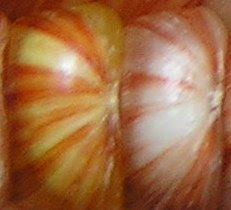 We had some really great guesses, all very logical, but who said I am logical?!? Well, I am, and painfully so, which is why I wanted to try and make this look like NOT what it really is. Here's another shot, a little zoomed out: 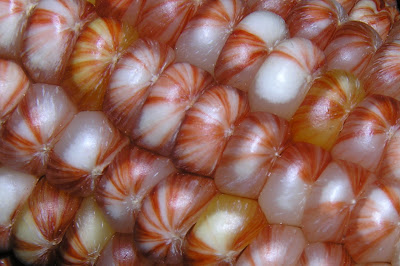 I just LOVE these colors and patterns, and I wanted to capture them before it was too late. Too late? Too late for what? Well, soon these pretties will be no more, because those pretty colors belong to this: 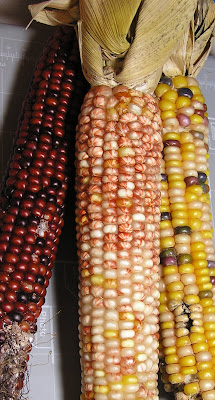 Dried-up corn. Yep - squirrel food. Well, first I had it decorating the outside of my cube at work, but after one too many collisions - people who ran into them, that is, complete with flying kernels - I decided it was time to bring them home. On the way out of the building, while holding them closely (I had two bunches of three corn cobs, and people were staring...) I noticed the pretty colors and decided to taunt you all with a What Is It post. And now that The Reveal is over, these will go out for the squirrels.

And while beginning the Clean Sweep for this weekend, I remembered I DID stamp something this week! Well, not really stamped, but, well, you see, I was dared - dared - to try this. Have you seen some of Michelle Zindorf's work? My, my, my, but she blows me away sometimes. I like her stuff, but I have never tried it myself. So when I innocently commented on this post over at Brenda's blog, she (Brenda) emailed me and dared me to try it. Maybe she even double-dog dared me. I was humbled, so I tried it. Fortunately Michelle's blog has a lot of How-To's and tutorials, so it makes things seem a little less daunting.

First I tried the brayer and a torn piece of paper, and I made this: 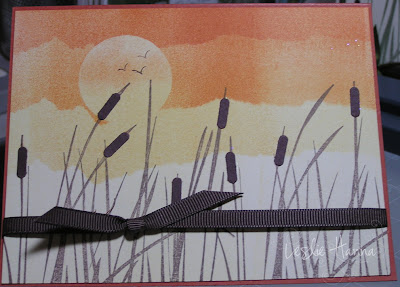 Eh? Not too bad for a first pass, but I think it needs some more definition between the layers of color. Plus, the moon (or maybe it is a sun) kindof melts into the rest of the layer of the same color.

Next I tried sponging the color layers, trying for the 'glow' look, but missing it by a bit. Okay, a lot. 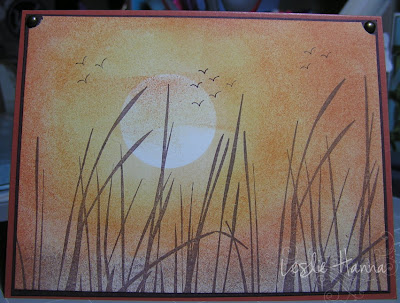 You'll also notice there is no ribbon on this card, and I think it looks nekkid. I added some birds, then I added some more, then some more, and it helped, but still...nekkid.

So now that I have procrastinated enough for this evening (I am supposed to be making up kits for this weekend ...), I suppose I'll get back to the Clean Sweep, because time's a-wastin'! Tomorrow after work, I need to go set up my booth for Saturday so I'll just have to show up and put some final touches on the tables before we open at 9:00 am. I'll let you know how that goes later this weekend.

Email ThisBlogThis!Share to TwitterShare to FacebookShare to Pinterest
Labels: Plain Ole Stampin', What Is It, Whining