I decided it was time to really hunker down and make up some projects for my December workshops. Here's what I came up with as possibilities this morning: 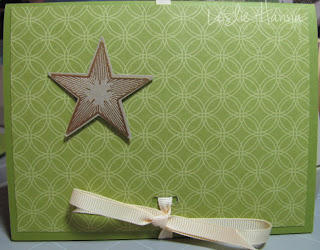 This is a gift card inside a card. I've played with these before, but I think I might have finally hit on one that uses current product. ;-) I made the outside simple since the real work is on the inside.

I used the star from a new (this year) SU Christmas set - Christmas Classics - and gold-embossed it on gold card stock. I think I'll go back and add a rhinestone brad to the center of the star, since it is already popped up on Dimensionals. Oh, and it punches nicely with the SU Star punch. How clever of them. 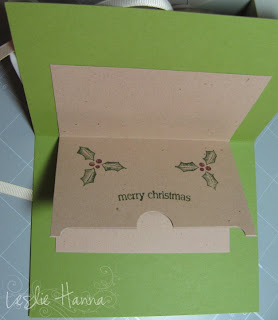 Here's the inside. I used some more images from the same stamp set for a greeting on the gift card holder. I used Always Artichoke and Bravo Burgundy markers, but I think I'll also leave out the Old Olive marker for my customers, just in case they'd like to have the ink color actually match the card stock. 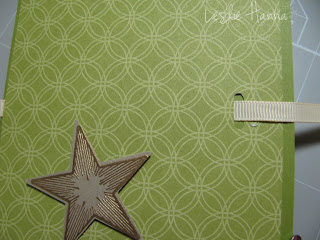 Here is a close-up of how I tied the ribbon around the card. I wanted the bow to be on top of the card, so I needed to punch a slot for it to fit through the layer of DS paper. I actually punched it twice, because the first time I placed it too close to the edge and I could not tape the DS paper down. So I retrieved the punch-out, stuck it back on, and re-punched the slot. I will advise my customers to punch it correctly the first time. I am constantly telling them to not make the card like I did; that they do not want to be like me.

This card is actually my entry as a Punch Fest card. Maybe I should offer a contest for how many punches you can use on one card. Maybe not. But this one uses four punches: Word Window and 3/4" circle punches for the gift card slot opening, the Star punch for (!) the star, and the Horizontal Slot punch for the ribbon opening. 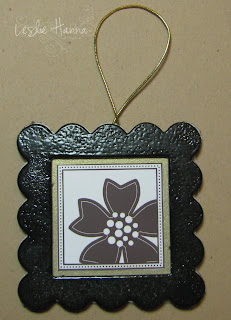 I have also been playing (a lot!) with these square chipboard frames I have. I was determined to use them for my workshops, and I finally came up with this. It is an ornament (or a package decorator), but it is also a major accomplishment in that it used so much of my stuff that I've bought for workshops but never used. AT LAST, success!

I covered the frame in Artichoke Craft Ink and embossed it with clear EP; the flower in the center is a rub-on (available in the Hidden Garden pack) that I bought in bulk; I rubbed it on white, then cut it out and stuck it on a piece of gold; and the hanger is a piece of elastic gold cord that I bought last year, but it is back this year, so I can use it. 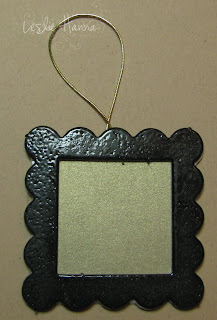 And I used even more of the chipboard by finishing the back of the ornament with another embossed frame. Yeah, the little edges of the cord are poking out, but, well, it is the back....


I think I'll go work on printing out all that SU paperwork for a while...I'll be back later with some more stuff I have going on. Busy, busy times at the Crooked Stamper table...
Posted by Leslie Hanna at 11:23 AM