Let me begin by saying I am sooooo glad I set up for my craft show last night. That let me figure out what I still needed to do, including retrieving things I'd forgotten, and I started out fresh this morning.

I took a photo of my booth, but I have to say I am embarrassed as all get-out at how it looks, so I am only going to show you the half that is not so bad: 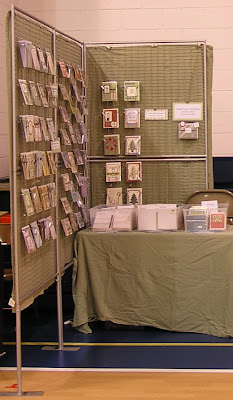 I swore I'd never use these walls again, which is why I've sold all but these three. They are not heavy, nor difficult to set up, but hanging the backdrops, then hanging the card racks on S-hooks is a bit much. But you know, so many people comment on how 'professional' it looks, I am actually glad I took the time yesterday.

When I had more walls, I put up more card racks, and I did not have any cards in boxes out on a table like I do here. But ya know what? NO ONE CARES, so I am over it now. But I really do need to upgrade those pathetic table cloths. Yeesh. Can you tell they spend the rest of the year in a bag in my car?

Sales were slow, but I have three new customers for my workshops, and several people took my card because I have an online store now (yes, I told them there were only three cards there, but the City Cards and my Christmas Cards are the ones they were asking about, so that's fine.) Plus, after whining about the slowness to one of my fellow market buddies who also does this show, I realized that I actually did really well, considering. Considering I did absolutely nothing special to prep for this show. All I did was grab the boxes of Christmas cards and ornaments from last year, then I put out all the cards from my market plus the Christmas stuff. LAST YEAR's Christmas stuff. And some of it even sold! So all in all, I moved some older inventory, and I came home with less stuff, which is a good thing! See, I can spin positive when I want to. ;-)

I don't know about you, but when I am tired, I am okay as long as I keep moving. Once I sit down, the old bones start to seize up and I start to feel really tired (and old). So tonight, needing to do the Clean Sweep plus cut up all the card stock to make kits, I just kept moving.

In case you were wondering, this is what Collating 101 looks like: 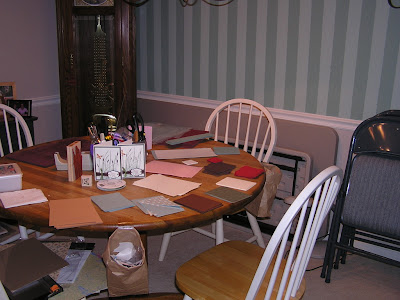 That's all the little pre-cut piles of stuff I need to collate for the workshop kits. Each card's parts-is-parts is all laid out, and I just move from left to right, grabbing one of each item, then I put it in a zip-top bag (waaaay over there on the right, past that back chair), then I start over again. This month I have 15 people total, so I made up 16 kits (it's just easier that way). And I did not bother to move that chair...I walked and reached around it all 16 times. Sigh.

Oops...I just saw that I forgot to clean off that chair over there to the left. That is my handy-dandy overflow storage for when the table fills up during the course of the month. Actually, I keep my small trimmer there so it does not get buried, and this month I also have several sheets of 12x12 paper I'd hoped to use, but did not get to.

This month I managed to mis-count while cutting, and I was four pieces short for two of the four projects. Yes, I am tired. So I thought I'd take this opportunity to share SYFY Tip #6.

One of the cards we are making is this one: 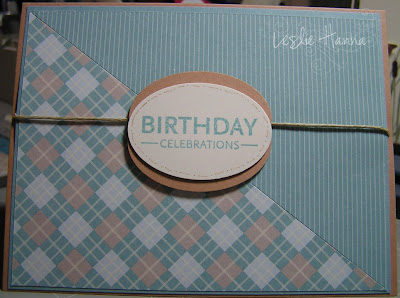 To make this, I used double-sided paper. BUT, because it is not square, you cannot just cut it on the diagonal and flip one half. You need to cut two pieces and swap out the halves. Let me show you:

Here is the correct way to cut the two pieces. See how the papers both have their cuts going in the same direction?

Then you just swap out two of the pieces and voila!
.

See what happens when you turn one of them over? This also happens if you think you are really smart, and you think that you need to cut the angle in the opposite direction. I think you can see where I am going with this.

When you swap out the halves, it does not look so good. No, I was not going for this particular look this evening.
So now that I have been sitting still for a while, and my entire body is seized up, and my eyelids are drooping, I think I'll turn in so I can be bright and cheerful for my customers tomorrow. Thanks for stopping by!
Posted by Leslie Hanna at 9:13 PM