A Semi-Productive Day Off

I don't know about you, but when I take a day off, it is all planned out to be busier than a work day. I take the Tuesday off after my monthly Sunday & Monday Stamp Camps so I can catch up with everything life-related that did not happen on Saturday through Monday, which would be a normal person's weekend. I never claimed to be a normal person, though. So Tuesday is all planned out in my head with "gonna do this and this and that and this and ...", yet when Tuesday arrives, I barely make it through half of that list. Let's see how I did today!

The Plan: Get up at 7:00 am (this is known as "sleeping in" in my world). Check.
The Plan: Shower right away. Yawn. What's the rush?
The Plan: Get dressed and go to the grocery before the Day People get there. "But I haven't showered yet."
The Plan: Be home from the grocery before 9:30, cuz I had someone coming over with some papers I needed to sign. I showered and got dressed. No grocery. Too late.
The Plan: Put away the rest of the Stamp Camp stuff. "Why? I have a partial kit left, and I might use it, so I'll need all that stuff. Let's leave it out, for now."
The Plan: 9:30, sign the papers, etc. Check.
The Plan: Post the trundle bed on Craig's List. "But look at all those stamps calling to me ...", so instead I made this: 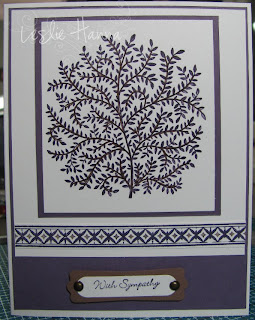 This is the purple version of my Blue Tree card. I thought it would look really nice in Elegant Eggplant, but now I am not so sure. Eh - I'll bag it and tag it and put it in my dwindling Sympathy section.

The Plan: Make new dividers for the market. Need 'Caffeine' and one other one, but I forgot what it was ... so I went to the grocery store. My house now smells like brisket ... m-m-m-m-m!

The Plan: Pay my MD Sales & Use taxes, which are due 7/20 for the first 6 months of 2009. To do this, I needed to find all my sales books and add up all the gross sales. Then I needed to find my Federal number, which I knew was on my paper form that has gone missing. So I dug through my 2008 papers until I found last year's form and finally filed my first-half 2009 MD state tax schtuff so the Govn'r is happy and will not send me hate mail. Check.

The Plan: Go to the pet store and get kitty a new not-plastic food bowl. This would require me to leave the house again, which was not going to happen. Then I thought about an old water bowl I had for her, which is made of crockery. It needed to be heavy because I was tired of her batting the plastic bowl around the kitchen's wood floor and spilling all the water out of it. But where had I stored it? After about 30 minutes I found it and swapped bowls. Might as well run the dishwasher, too, while I'm at it. Check and Check.

The Plan: Run the dryer so I have clothes to wear to work tomorrow. Check.
The Plan: Fold the clothes when the dryer is done. Carp. Need to run the fluff cycle now.

The Plan: Make several doctor's appointments. You know, the kind that you do not want to make on the phone in Cubeville with 12 other people listening in. Yeah, those. Forgot to do them. Carp x 2. 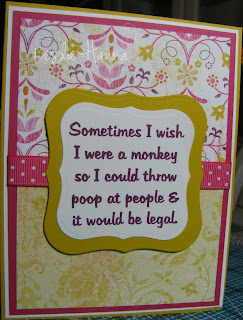 This was made from my partial kit from the Stamp Camps (we had a few boo-boos, so the kit was scavenged for card parts). I am woefully low on irreverent statement cards, so I made a few. I love it when people come by my booth and pick up a pretty card, read it, then put it back. :-) 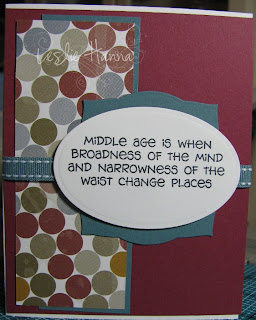 This is a card risen from the Scrap Heap. After I'd put on the ribbon, I realized the red/cranberry layer was a full 4 1/4" wide, and since any of my stamping customers will tell you I am incapable of cutting a perfect 4 1/4 x 5 1/2 card front, I knew this would never layer correctly, so I trimmed the top and bottom, so now it just looks stoopid. Hopefully the buyer will be so wowed by the sentiment they will not notice the layering. 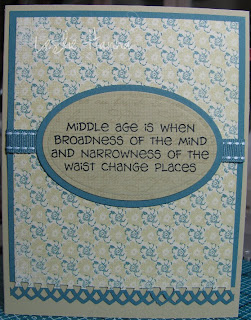 This is another Scrap Heap card using the same sentiment. I cut the patterned paper layer a bit shorter than I'd planned, so I needed to save myself, and I chose to punch the bottom with this MS border punch whose name escapes me at the moment.
The layer with the sentiment is from the UFO pile. It has a Canvas image plus a word background stamp image, so I stamped the sentiment in black right over them and cut it out with a Nestie.
Moving on ....
The Plan: Make a UHC card and post it. I checked the list, and there is only one more holiday of note (in my opinion) in July and it is not until the 25th, so I'll hold off on that until next week (she says as she slinks away from the fact that she failed to deliver.)
As I predicted, my day is over and I have barely accomplished anything from the list. Oh, well. There's always tomorrow.
And finally I bring you:
The Plan: Eat the freakin' brisket already! Check! Off to do that right now!

Thanks for stopping by!
Posted by Leslie Hanna at 6:28 PM