What's With The Owls?

I don't know what's come over me, but I am in an inexplicable owl rut. Check it out two of the cards I made yesterday: 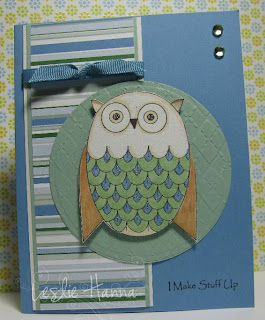 More stash schtuff, plus an owl stamp (Memory Box) I picked up at Angela's. It was taunting me, it was. I have walked past it and resisted it several times, but this time, I needed it. It is a little smaller than the other owl stamp I have, plus I like that his feathers have two parts for coloring.

The sample I saw in the store had bling in each of the parts where I colored it blue, but that's a lotta bling, and I am too lazy to do that. But I did go back with a clear gel pen and outline the blue feathers. For some reason, my brain did not interpret this as 'work'.

The sentiment is an older one I have (Rosie's Roadshow) but have never used. I was looking for my "Hoo's having a birthday" sentiment (I think I own one), but I found this one instead.

Did you notice his little ears curled? Kinda cute, I think! 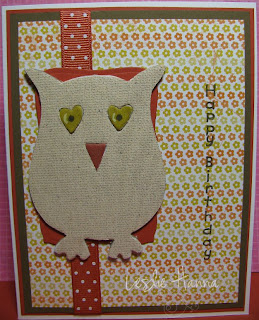 Next I grabbed two of these SU Chipboard owls and covered them with a scrap of patterned paper that was on The Mini Heap. I think the paper was destined to be an origami shirt, but it never made it past the cutting phase.

I used mostly new In Color stuff here: Dusty Durango base, die-cut layer behind the owl, and ribbon; Soft Suede layer; Razzleberry Lemonade DS paper; Dusty Durango and Crushed Curry markers (for the eyes and nose); Soft Suede ink for the sentiment and the SS marker to go over the letters so you can see them on top of that busy patterned paper.

Okay, I am done. Please check out my previous post to see a prezzie I got today from Lydia. Cute!