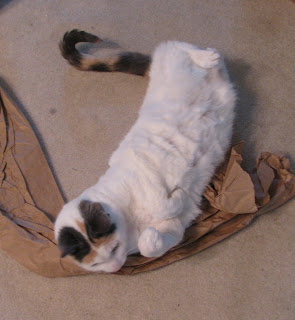 It is Sunday morning, and I am in stampin' mode. Well, I'd LIKE to be, but the brain is not cooperating. Kitty compensates for my madness by doing this. Me? I baked Banana-Blueberry bread, because that's what I do with bananas that are taking on personalities. They must be baked into something good! 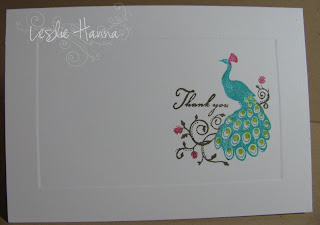 I thought I'd start by mounting my new SU Ronald McDonald stamp set and using it. My 50% rule does also apply to this set, even though it is for a good cause. If I do not like the stamp set, I'd rather throw some loose change into the bin at McDonald's. [I have no room, people.]

So anyway, this stamp from the set is (I hope) a peacock, or at least a pheasant, and they have colorful tails. I thought it would be fun to use this to make a set of Thank You notes, which seem to actually be popular at this year's market. So I started coloring the stamps with my SU In Color markers.

After about 30 seconds, I realized this is NOT easy to do if you want to make more than one of them. I ended up coloring the bird in Bermuda Bay, then I used my Blender Pen to remove the ink from the circles in the tail, then went back with the Crushed Curry marker to color them back in. This immediately set of the "this sounds like work" alarm in my brain, and I stopped. 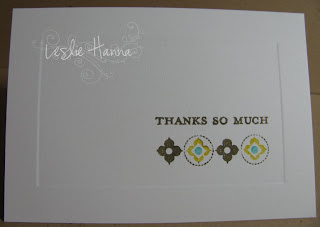 Then I moved on to the second stamp in the set I thought would work for Thank You notes. This was a bit easier to color, but still tedious. At least I did not have to line up the sentiment and row of flower thingies - it is all one stamp! If for only that reason, I love it. I only made two of these, and set them aside. Not gonna happen today. 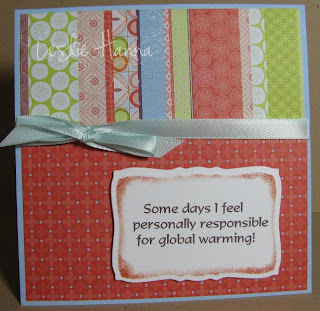 Another lofty goal of mine on any given day is to use some of my stash (aka: Scrap Heap) and make it disappear a tiny bit more. To this end, I selected these two papers and put them on a Bashful Blue square base. SQUARE! Yes, I know! But the papers were too pretty to cut down, and then I'd be left with more scraps, so using a 6" piece of paper on a 5 1/4 card was a good option for me.

The sentiment is another one overheard in Twitter-land. I just write them down for later. I opted for no image on this one, because the paper is pretty, and busy, so why bother. It does mean this is a stamp-less card, as the sentiment was computer-generated, but I made four of them, which equates to a whole 12 x 12 sheet of paper! Yay, me!

And lest you non-stampers think that mass-production is easy, allow me to show you why we stampers need to always be on our toes with minds alert and churning. The following two images bring to life the adage that "there are no mistakes in stamping - only opportunities for embellishment".

I this version, I did a particularly poor job attaching the papers to the card base, and I am out of alignment. A single wrap of that ribbon would not begin to cover my error, so I went for two. Yes, I wrapped this ribbon around the card twice, then spread out the ribbon in an attempt to disguise the flaw, or to at least draw attention away from the flaw. 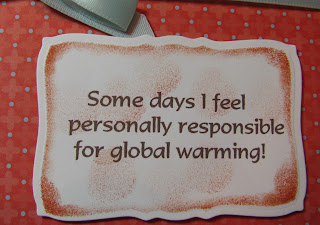 In this example of a quick recovery, I had an unfortunate finger print smudge between the words "for" and "global", which I ever so cleverly disguised by sponging on some more of the Dusty Durango ink to make it look like I meant to do that. 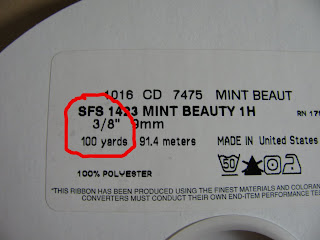 And if you think that twice-wrapped ribbon is wasteful, here is why it is not (at least in my house). 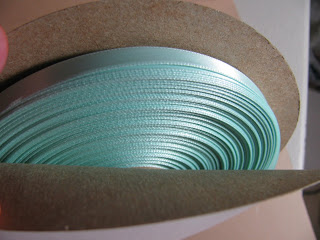 Just look at all that satin-y goodness! So if I wrap it twice, it's not like I'll run out any time soon.

Okay, I'm off to do some more damage to that Scrap Heap. Thanks for stopping by!