Hambo has introduced some new really cute foodie kid images, so for this week's Hambo Hoedown challenge they gave us (if we played last week) this one to use: 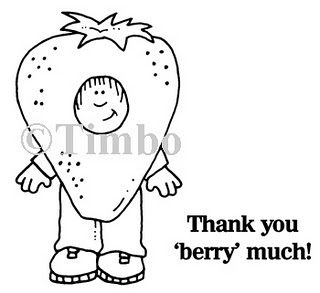 The secret ingredient (yes, I read it before I made the card...) is BUTTONS!

Caution: What you are about to see is disturbing. This card: 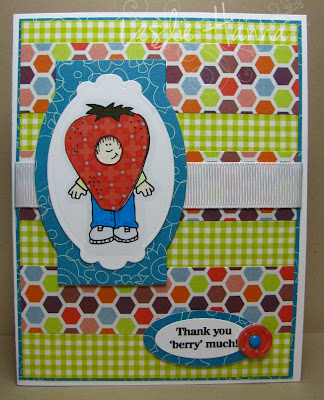 is so wrong on so many levels. Oh, it does meet the challenge criteria (I made that button to match the strawberry, but we'll get to that in a sec), but the composition is just ... sigh.

First lesson: Just because a paper pack has lots of patterns and colors doesn't mean you need to use them together.

Second lesson: Do not keep adding and adding when you should be taking away.

Third lesson: Maybe don't craft after you've been in the hot sun all day.

OMG, I cannot believe I've posted this card. It all started when I printed the strawberry kid on a piece of sorta-poppy paper from a stack o'papers I found in the back-up Heaplet. I think it was from a pack of 12x12 that I cut into quarters and gave away three of the four stacks. We're talking years ago. Years. So anyway, After I cut out the strawberries (I made two of these) I looked for a layer for the white die-cut piece and chose that turquoise. Then I colored the kids.

Then it all went South. I couldn't just put those boring blue layered pieces on a white card base, now could I? So I went back to that stack o'papers and eventually chose that checked pattern. Then it seemed like too much, so instead of changing the paper for something else, I tried to cover it up by adding yet another paper. That honey-combed piece started out as just one strip under the blue-layered image, but I went a little nuts (must be the sun) and added two more strips. Uneven, too. (What, you expected less?)

I couldn't take it any more, so I ... covered up the middle strip of honey-combed paper with a piece of grosgrain ribbon. I think this card weighs 4 pounds now, but I did use up a few 6x6 pieces of papers, so there's that.

Oh, back to the button. Remember I actually read the challenge before I made this card, and I knew I needed to include buttons. Normally I would have gone for extra credit and loaded up the buttons, but nooooooo, I had a hair-brained idea to make buttons out of the scraps of that poppy paper left over from cutting out the strawberries. You know, for balance. I didn't cover it with Crystal Effects because it would have been tomorrow before it dried, and I have that whole instant gratification thing going. Plus, tomorrow I need to make 3 more cards for next weekend's Stamp Camps. Yeah, I'll be a bit busy.

In other news, today's market was FABBY! I had a ton of sales and had several repeat customers. One of them stopped by - on purpose - to give me something. She is associated with that Malamute Rescue show I've done in VA the past two years. She was looking for me because she had two books of snarky sentiments she knew I would appreciate. I love it when my customers think of me as the Snark Lady. (hee hee) I'll do a separate post with market pics later.

Thanks for stopping by!
Posted by Leslie Hanna at 6:53 PM