It's been a few weeks since I've shared the mess that is my stamp table, so why not: 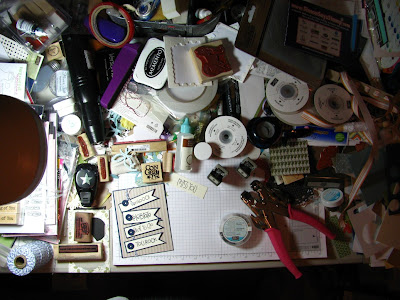 Yes, it's pretty bad. This was taken Tuesday evening as I worked on a card that has since been finished and is on its way to its recipient. I'll post more detail about the card on Friday, including a few pics about those buttons.

Also (still) out on the table are:
- baker's twine from my patriotic cards from the other night
- a star punch from the same episode
- the Congrats stamp from my money holder mock-up
- a bunch of other s-crap I don't want to talk about

There, I've taken another one for the team. You're welcome. I'm posting ALL OVER THE WORLD at both WOTT and WOYWW, because I can. :)

And thanks for stopping by!
Posted by Leslie Hanna at 9:42 PM