You Are My Sunshine

I'm still watching class videos for the online class A Cut Above, and playing with my Silhouette Cameo. We've learned so many tricks! I've not mastered some of them, but in general, this class has totally been worth it!

Here's a card I just made: 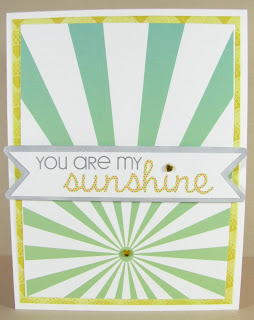 I'm not even sure which class this goes with - it's kindof a morph of a few different lessons. First, I brought in the rays/background image, filled it with a gradient blue-green color (I even learned -- all by myself -- you can change the direction of the shading. Sweet.) Then I changed it to only print, not cut, but I drew a box around it and had THAT cut.

I played with the sentiment a bit. Originally the "you are my" was going to be cut out of the card front with the rays on the bottom 2/3 of the card, but I decided to just do it separately. I filled the letters with grey, then got a bit wild and filled the "sunshine" with polka dots. I wanted to make it yellow, but this was soooo much more interesting. We even learned how to scale the pattern down so it works in the smaller letter space. Lookie: 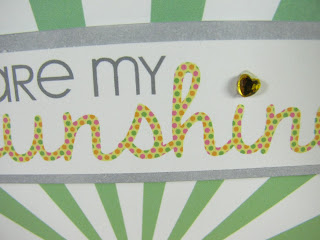 The dot over the "i" is a heart, which gave me the idea to use one of my hoarded A Muse heart gems over it. Just using the stash, people. Oh, and I had to make these words print-only and I just cut the banner part.

I only made one boo-boo. I forgot to cut a second banner to use behind the white one, so I went back and made one just a bit larger than the white one, then cut it out and colored it with one of my Copics -- N1 or N2, I forget. See:

NEXT time I'll remember to cut ALL the layers. And yes, there will be a NEXT TIME. Note: that yellow layer is actually paper, from my Basic Grey PB&J 6x6 pack that's still out. :)

Tomorrow is the last day of class, and I hope to have time this weekend to play some more.