Happy Sunday, everyone! Here in MD it is a beautiful, sunny day. Too bad the market was yesterday, when it was not glorious and sunny. Nope. Yesterday looked like this: 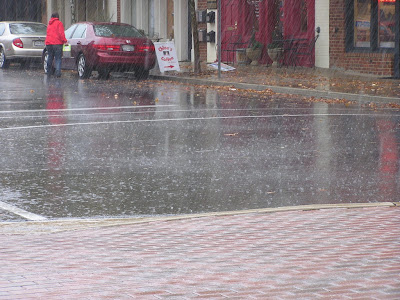 But I was there, as were the farmers and one other crafter. Good thing, too, as that other crafter was the reason we were having a baby shower! We also had our Pot Luck, and let me tell you, these people can COOK! We stuffed our faces and around plate #2 or 3, I whispered to our pregnant crafter that we had a little surprise for her. It truly was a surprise, and it went over very well!

Business was surprisingly busy considering the weather. People came out between downpours and ran through the rain to get their veggies. Now that's some hardy shoppers! I did okay - better than some non-rainy days, even.

One of my SU customers stopped by to pick up her order and also borrow my Top Note die, and she and hubby brought their adopted Bull Dog, Wrigley: 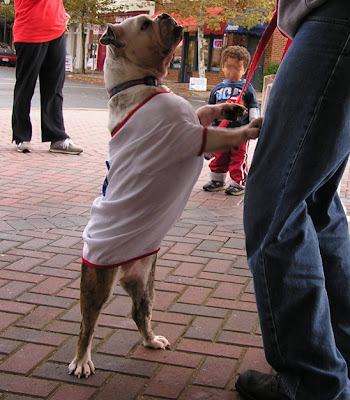 I really tried to get a shot of Wrigley not wriggling, but she knew her Dad had treats in his pocket, so it was a little tough. 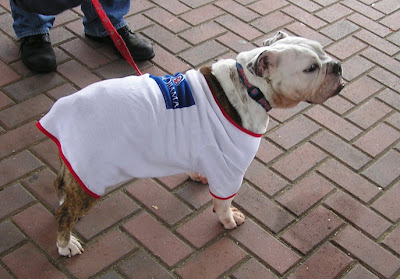 And that T-shirt? I thought it was a small people shirt that said Barak Obama, but no, it was a dog T-shirt that said Bark Obama. I hear the other version is John McCanine, or something like that. I tell you, these dog people ...
So when I got home from the rainy market I set in to work on my October belated birthday cards. After a few failed attempts, here is what I ended up with: 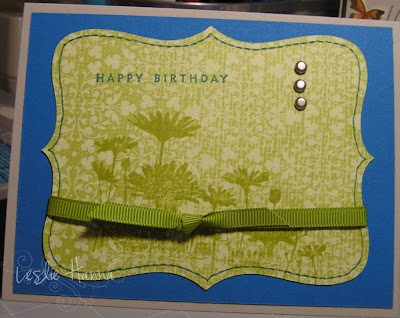 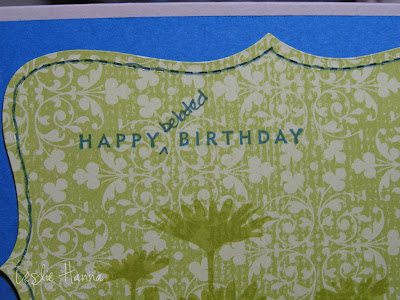 And a few of them will get this as their ribbon instead of the tied version: 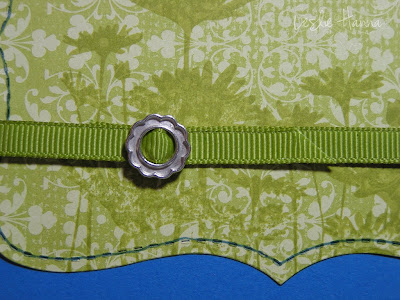 This version is my SYFY Tip #5. I had already employed SYFY Tip #1, but I had still cut the ribbon too short to tie. Rats! Enter the Ribbon Slide. I slipped that baby onto one of the ends of the too-short ribbon, stuck it down with some glue-dots, and it looks like I meant to do that!

So the cards are made and ready to address. That's one thing to check off my list of things to do while not doing other things that need to be done today. One side note: I do not own the Big Shot. I only bought the Top Note Bigz Die and I use my Cuttlebug to cut the shapes. The die fits quite nicely between two B Plates. Sandwich: B-plate, die, card stock, B-plate (I like to have my die face-up so I can place the paper exactly where I want it over the shape.) Too easy! So for those of you who covet the die but don't want to invest in the Big Shot - take heart! :-)
I guess I'll mosey on back to the laundry room and put some stuff into the dryer. I have a few more tricks up my sleeve that I hope to get to later today, after I fold the towels, of course, so hopefully I'll have something to share later today or tomorrow. Thanks for stopping by.
Posted by Leslie Hanna at 10:51 AM