A Horse and a New Little Something

In April 2005, a group of us took a walk on the canal, and I, of course, took my camera along. Every once in a while, you'll see someone on horseback, and on this particular day an absolutely GORgeous horse came up behind us. He The horse's rider told us he was getting ready to gallop, so I decided to try my motion setting on my camera. This is the resulting photo: 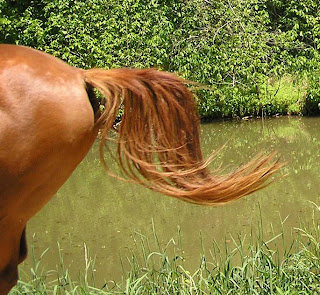 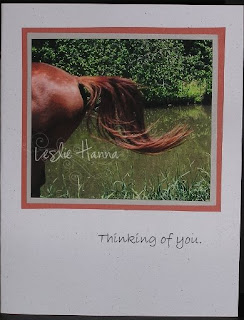 Here is my 2005 version of the card. I am sold out of these cards, but I have the photo in a frame for comic relief, and several people have asked about it. I just never got around to printing any more of the photos. Until tonight, that is! I took some time to print off all the card images for my inventory book (next week is the start of this year's markets), and while I was there, I printed a few horse derrieres. 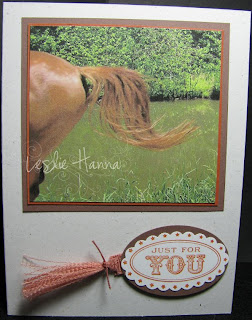 Here is the 2009 version of the card. Instead of printing the sentiment on the 'puter, I actually opened one of my new stamp sets and used it. Radical, I know!
So enough about horses' behinds - let's move on to that 'new little something' to which I alluded in my title. BR #2's life is riddled with blog fodder. She should write a book. I even gave her a Whine Journal last year to get started! If someone would only write down the stuff she tells me, that book would write itself. So she started a blog, and posted I think three posts, and then she gave up. She tried, but she is unable to type like she talks, so she has given me permission to post selected stuff here, even photos.
Decision time: What is a blog? A blog is a Web Log, usually by a person, with posts about themselves. I decided that as much fun as it would be to include #2's antics in my own blog, it would be way more fun to ghost-write her blog. So I made up a new blog and I called it: My Blog Writer Wrote This For Me. Hey, that's as creative as I could get at this late hour on a Sunday. My first post was tonight, so head on over there and check out her life (as seen by me and based on things she tells me). This could be fun! Go ahead and leave her a comment, too! [Edited to remove the new blog.]
Time for bed. Gotta get up in the morning and head to The Day Job. Thanks for stopping by!
Posted by Leslie Hanna at 9:17 PM