What happened to Spring? Just last week it was in the 70s and maaah-velous, and this weekend it was sweltering. Today it hit 90! Yikes! And it is APRIL! 90+ degrees in the summer is pretty standard around here (remember the three H's: Hazy, Hot & Humid), but it is freakin' APRIL! I could not sleep last night it was so hot, and I had to turn on the A/C. In APRIL! Apparently the building in which I work had not enabled the A/C yet, because it was 80 degrees in there today - all day. Can you say "oppressive"?

Pop quiz! What is this: 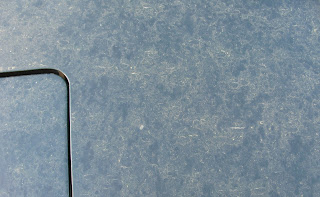 ? Anyone? This is a shot of part of the hood of my BRG (British Racing Green) Miata. BRG is a really DARK green. What's that you say? It looks yellow? That's because it is yellow, as is every other non-garaged vehicle in the area. If you live anywhere near DC, this is what tells you Spring has truly arrived. This is tree pollen. And unless you park your car in a garage, your car will look like this. This generates long lines at the car washes. Well, not me, of course, but other people get their cars washed. My cars get washed when the neighbor washes his and feels sorry for my cars and washes one of them for me. I'll get the Miata detailed here in a few more years. Hmmm ... it may actually be the year for its detailing. I'll have to go look that up. 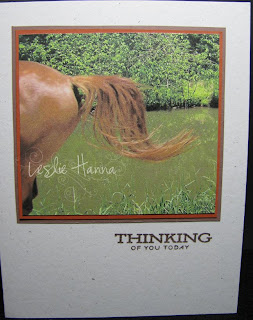 Moving on ... tonight I finished up my "horse's behind" cards with another version. I really like the 'thinking of you' sentiment. This one comes from my recently-acquired PTI Anniversary set. Apparently I have purchased 12 sets in the past year, so I earned a free Anniversary set. I am not sure this is a good thing (having purchased 12 sets), but I sure do like the sentiments. ;-) 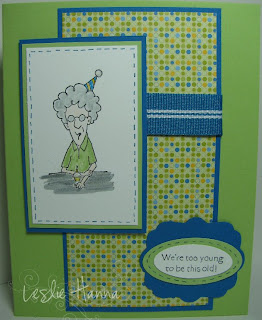 I also realized that not only is this coming weekend my first Market, but it is the only weekend left before my May stamp camps. OOFH! As of the end of my third session in April I had four ideas from my customers for projects, and I have since forgotten all of them. I am pretty sure I wanted to use this set, so I made this card tonight to take it for a test drive. I fell in love with this paper when I first saw it, and I just now opened the pack and cut into it.
That shape behind the layered oval punches is one of the dies in the SU Sizzlits Lots of Tags set. I saw it on another blog (I'll update this post if I can find it) and she had layered the SU Wide Oval on top of this die-cut, so I thought I'd try it with the two smaller ovals. I kinda like the look.
Ach, would you look at the time. Now that the A/C is on, I think I'll try and get some sleep tonight. Thanks for stopping by!
Posted by Leslie Hanna at 8:43 PM