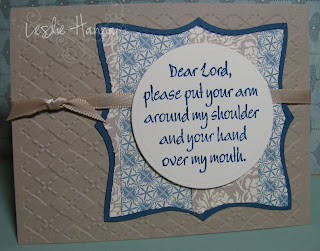 Given the fun I had last night making a card I had in my head actually come out on paper, tonight I decided to try cutting the vanilla piece down first before sewing along the edges.

What? You do not see a vanilla piece on this card? That is because I totally messed up and it is now in the trash. I gave up. The DMC floss won that battle.

I moved on to Plan C, which turned into this card. I am working valiantly to use up those pieces of pre-cut papers; I taped them to a scrap and cut them out with the Top Note die, then turned the piece 90 degrees and cut it again to make a square. I did the same thing with a piece of Not Quite Navy, trimmed the paper piece and layered them together. Niiice.

Without the vanilla layer, this card looked nekkid, so I did something that turned out to be a very expensive venture: I tried to use one of the SU embossing plates in my Cuttlebug. I tried a few different sandwiches, then gave up and I ordered the Big Shot. Yes, I did. Then I listed my Day Bed on Craig's List so I'll have room for a cabinet to hold the BS when it arrives chez moi.

Since I failed with the embossing plate, I ended up using my relatively new made-for-the-Cuttlebug Argyle embossing folder to add some texture to the Kraft card front. I added some ribbon from the Every Color But The One I Need box of Neutrals ribbons, and I used one of my irreverent sentiments for the center. I have a really difficult time making a normal card. Really!

Without the sewing, though, this will be much easier to replicate. :-)

In other news, Twitter, though it may be free, has cost me a bundle this week. First, I caved and ordered a Blackberry phone. Why? Two words: Internet Access. I plan to wile away my market hours (when I am not selling anything) and keep up with my Google Reader reading. This should keep my running total of unread posts under the 500-level I hit this weekend.

I have also just caved and bought ... the Big Shot. Yes, I did. In order to get a cabinet in which to store the BS, I have listed my Day Bed on Craig's List to free up the wall space. I told you it was a tiny condo!

Okay, off to do some laundry and get to bed at a reasonable hour. Maybe.