During last night's Clean Sweep, I took a few minutes to finish these cards, mostly so they did not end up on the Scrap Heap, ne'er to be seen again. I originally had a green card base, but once I cut the green down to just a layer and put it on a white base - voila! 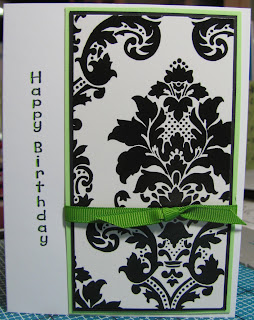 I have two different vertical Happy Birthday stamps (embarrassing, yes), and I stamped one of them here (mostly straight), then drew some green highlights on the letters with the Gable Green marker. I thought it looked nekkid otherwise. 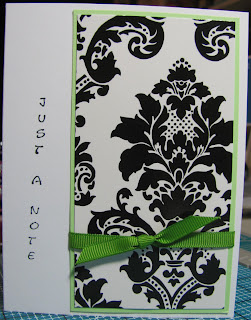 I made four of those, then I went in search of the vertical Thank You stamp I just knew I had so I could make four Thank You cards. Unfortunately, the sneaky bugger has gone underground and cannot be found, or else I never really owned one in the first place. Highly unlikely, but you just never know. It was getting late, so I grabbed my Just A Note stamp and made four of this version instead. Yeah, it's stamped crooked. Surprise, surprise.

The ribbon is retired SU Apple Green, and I think it goes just fine with the Gable Green layer! Wow, at this rate, I'll finish the whole Apple Green spool by, oh, I don't know, maybe 2014? I swear I barely made a dent with eight cards. This was definitely a SABLE (Supplies Available Beyond Life Expectancy) moment.

So all the B&W is behind me now, at last! Today's workshops went very well, and all the projects were well-received. We even had two saves, which are always exciting and force us to stretch our collectivie creativity. My customers think I am real smart when we have these Save Opportunities, but I told them that I mess up so much all by myself, I've "been there, done that" so many times that I know all sorts of ways to make things look like "I meant to do that". We have a good time, and that's really what it is all about.

Well, time to finish the laundry so I can go to the Day Job in the morning. Thanks for stopping by!