Tonight I arrived home invigorated to attack the Scrap Heap and begin the creation process. 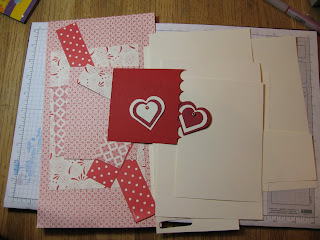 The first thing I grabbed off the UFO pile were these two hearts, plus some Cherise DS paper, some Very Vanilla c/s and some reds (mostly Ruby Red and Real Red). It turned out the red in the hearts was too deep in color to go with the SU reds, but I still used almost everything else! 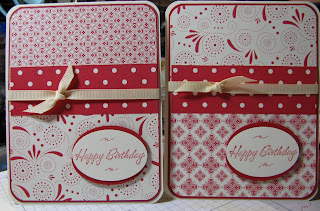 Here are cards # 1 & 2. Not bad, not bad. I originally wanted to use red brads witht he sentiment pieces, but they looked funny, so instead I doodled over and under the sentiments to try and 'fill it in' a little. 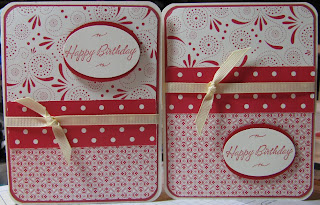 Here's the other two I made. 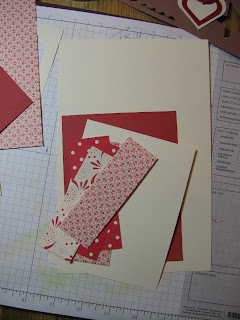 I was going to call it quits with this selection of scraps when I spied these ... 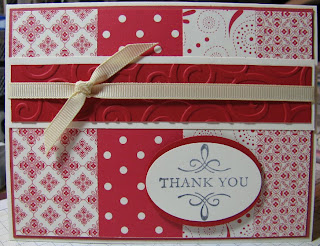 ... and I made this. I have to thank June for inspiring me here. I played with the red-on-vanilla horizontal layers until I thought to dry-emboss the red strip to give it a little oomph. That was the ticket!

I opted to use Basic Gray ink on the sentiment so it did not melt into the background like the red ones above did. Gotta have a little contrast! I may go back and re-do the other sentiments. I think I have enough Vanilla scraps to do that ... :P 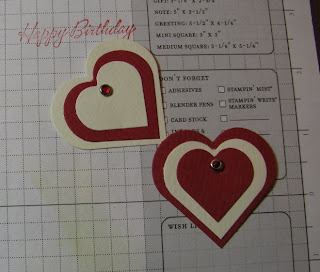 When I was done, these lonely hearts were left. So sad. They had to go back to the UFO pile, but I have a plan for them that I hope to get to tomorrow. 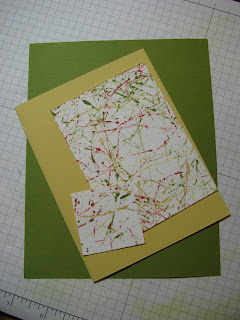 For my next trick, I plan to use this scrap of made-it-with-marbles paper from I think LAST Christmas. Ugh. I am trying to figure out how to make it look not Christmas-y, so I pulled out the So Saffron and Old Olive pieces. I'll tackle that one first thing in the morning.

Thanks for stopping by!!!