What I Did When I Should Have Been Cleaning

I have always worked well under pressure, and this is a good thing, given that I wait until Saturday evenings before my workshops to begin the Clean Sweep. One of the things I like to do is to try and actually use some of the s-crap on my tables so it does not end up on the Scrap Heap. This is what I managed to accomplish last night: 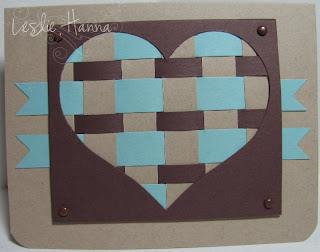 This is made from all the strips of Kraft and Baja Breeze and Choc Chip I had piled up after cutting up the card stock for the kits. I even had a pre-scored piece of Kraft out, so I used it for the base. Sweet. I cut the heart with my Cricut (still not sure if I am going to keep it or not), and just layered it over the woven part; the brads do help hold it all together.

The Baja pieces sticking out on either side of the piece are separate scraps and not part of the weaving (I am not that good). 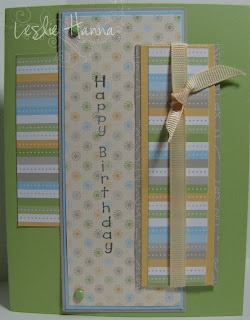 This card is the result of using some of the parts-is-parts from failed didn't-make-the-cut cards, right down to the already-tied ribbon. I just grabbed a vertical sentiment, stuck in two brads and called it DONE! 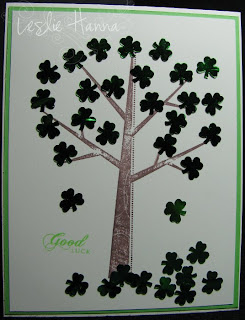 This last one is largely justification for my having purchased a bag of clover/shamrock confetti. But when I bought the stuff, I really did have this use in mind...it just did not happen until last night. 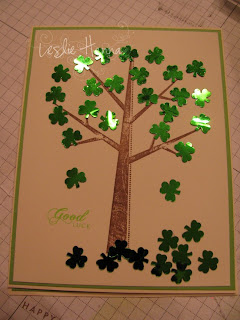 This shot of the card is all yellow due to the lighting, but you can see the shiny clovers/shamrocks better.

I used the Good Luck sentiment because I have serious doubts that this card will sell THIS WEEK, so I need to be able to carry it around with me all Summer, ergo no St. Patrick's Day sentiment (yeah, like I even own one - not!)

I had two of my three workshops/stamp camps today, so I am vegging right now. Guess who else is?! 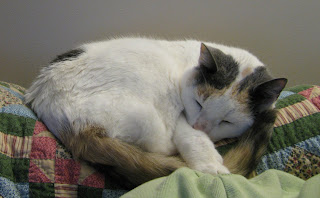 Yeah, she is utterly exhausted from all the activity today, and the fact that the doors and windows are all open because (even though I was shovelling 6" of snow on Monday), today it hit 70 degrees! Woo-hoo!

And because of those dark spots on her nose, which is not dirt (it will not wash off), and more so because none of it was there this time last week, she gets to go to the Vet Tuesday morning so we can find out if we should be worried or not. Poor dear.

I think I am going to turn in early tonight to rest up for the Day Job followed by a workshop tomorrow evening. I took Tuesday off to recover, though after I made a list of things I hope to accomplish on Tuesday, I may wish I'd gone to work instead!!!! Nah, I will still get some stuff done, plus I hope to meet up with June at Angela's. :-)