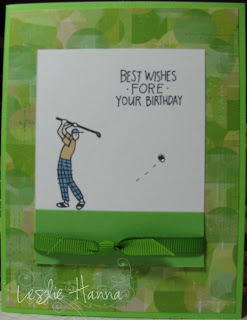 Today's Under-Appreciated Holiday Challenge celebrates Golfer's Day, which is observed each year on April 10th. I, personally, am not a golfer, though I did play one on TV. Oh, wait a minute, that was not me. But I did play in a golf league many, many moons ago.

Back at my very first job, the second in command in my Department (a woman, by the way) strongly suggested to me one night during happy hour that I really should take up golf. (She played on the Co-Ed Softball Team, too, just so you know this was nothing unusual. She was a lot of fun, actually!) Even though I'd caddied a bunch for my Father when I was growing up, I'd never actually played at the sport myself. I took lessons, once, and it did not stick.

So listening to the advice of my superior, I coerced a fellow non-golfer to be my partner, we went out and bought clubs, and the first time we teed off for the league was the first time we'd ever played. Ever.

Let me just say that we got the two highest scores that day, which I knew enough to know was not a good thing. It was a par 27 9-hole course, and we got 100 and 105 respectively. And our arms were really, really tired.

The funniest part of this whole story is that as we improved over the course of the season, we consistently had the Most Improved scores, so we kept winning all the prizes. It was really pretty funny! By the end of the season we were down into the 50's, and quite proud of it. We did not join up the next season...we knew when we were out of our league (I had to say that!)

So that's my story, and I'm sticking to it. Happy Golfer's Day, everyone, and I hope you live somewhere where it is nice enough outside right now to play!