Most of you know by now there's a bunch of things I don't "do". For example, I don't "do" Halloween, or Easter. I also struggle with froo-froo and girly. Something else I don't "do" is altered art. I mean, I live in a tiny condo ... where would it put it?!

So it may surprise you to learn that I  ... altered something. I DID! It's mostly because my stampy pal Libby made her DT debut over at the Stampotique Designers Challenge blog, and the current challenge is Alter It.

So I did. This is what I made: 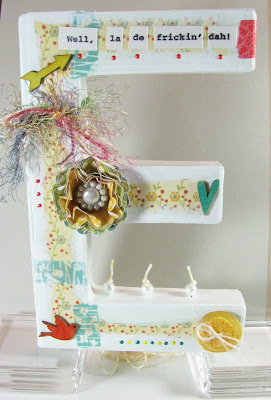 It's an E, if you couldn't tell. I bought it many years ago, with the intention of altering it and then moving on to another letter, and in the end I'd have the letters for "EMBELLISH" on my wall. Yeah, right.

So I had the letter, and I started playing. Here it is mostly in the raw: 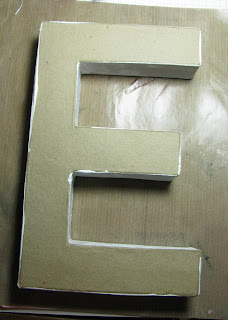 I covered it with pretty paper and then painted the sides a hideous baby-puke green. I spent the next few layers of paint attempting to cover it all up, and I managed to paint over most of the paper. I know, I know, I could have added more, but I decided to focus on embellishments instead.

I knew I wanted one of my favorite sentiments front and center:

You know, Libby is responsible for me owning this sentiment, so this is just perfect for her debut, don't you agree? :D

I also decided this altering thing is second only to scrapbooking in that you get to use so much of your s-crap, and in this case it doesn't even matter if it's FAT and FLOOFY, so I went for it: 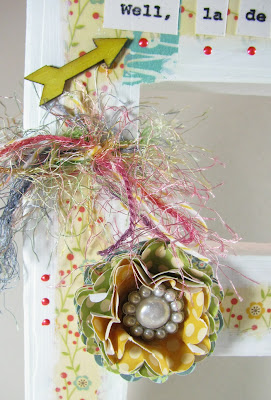 I dug out some fun yarn, wrapped it around a few times along with a piece of yellow & white twine (hey, I couldn't decide) and tied it into a bow. Done. Then I made a crumpled flower and put a huge brad (minus the legs) in the center with a ton of glossy accents.

I also used a big-a$$ button on the bottom right: 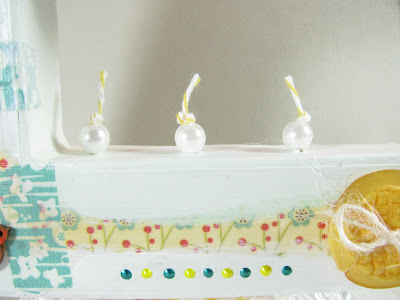 But the thing I wanted you to see here, besides the mostly lined up Liquid Pearls, are those three pearls with twine in them. Those, my friends, are the insanely good idea of my pal Marianne of RuffHaven. She said to tie some ribbon around the bottom of the E, or thread it through, so I could hang even more stuff from it. I poked holes through the bottom and up to where those pearls are, threaded the twine through with a long needle, and tied the twine through pearls from my SU Pretties kit both top and bottom:

Those pieces of twine can, in theory, eventually be tied to more baubles at a later date.

So, the E is now done. At this rate I will be 112 years old by the time I spell out EMBELLISH. So many letters. I need a new word, but it needs to have an E in it. I'll work on that.