Crook Goes Back to Virginia

I decided to start off tonight's post with a photo to make you a little dizzy: 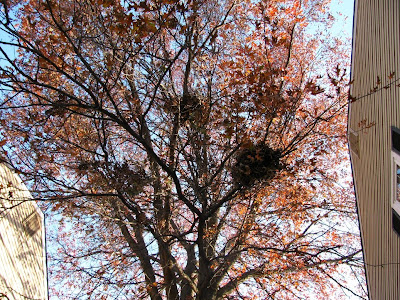 I took this outside my front door, looking straight up at the tree between the buildings. I think those are squirrel nests. It was a beautiful day and I just felt like taking that picture. I'm done now.

Saturday was the craft show I almost bailed on but I'm glad I didn't. It's small and a really fun group of people, and I got over being perpetually tired, sucked it up, and went. When I walked in the door to find my assigned table, I heard, "The card lady is here! Yay!" Gotta love it!

This was my world for most of Saturday: I only brought one of the Plexiglas racks, and you can see I have not much to offer anyway: 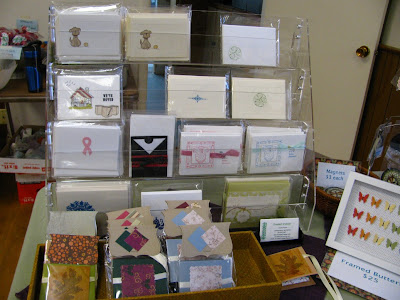 I failed to make any City Cards for that area, so I didn't have any of those to take up space. I did have the dog cards I made at the last minute Friday night, and I sold ... zero. Not one of them. Pthtth.

I brought both spinner racks: 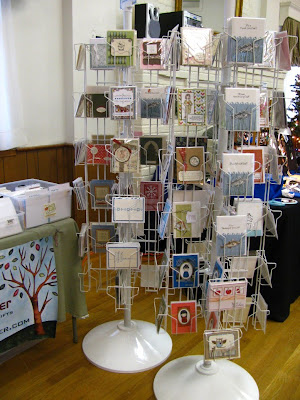 ... and the extra holiday cards I made last week filled up one of them nicely.

The corner of the tables started out looking like this: 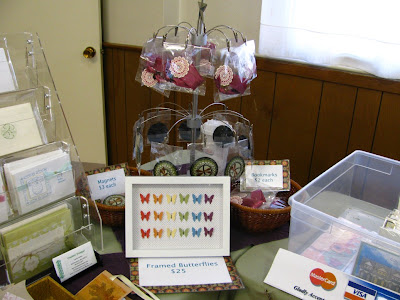 But after a while, since most people just reached into the baskets anyway, I got rid of the pretty stand and was left with this: 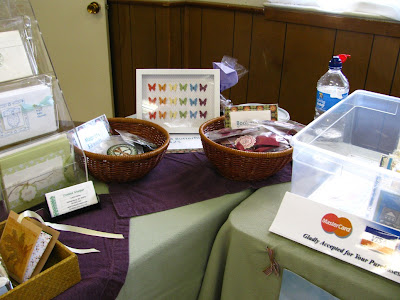 We were provided with coffee and donuts in the morning, and after a few hours, I realized I needed to keep up that sugar high until lunchtime, or I'd crash, so I did. *burp* They also provided lunch for a small fee. We had Italian sausage, cole slaw and corn bread muffins (with real corn!). After that, I needed something to wash down all that spice, so I got two of these from the bake stand: 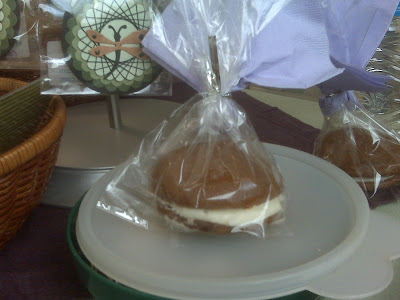 Pumpkin mini whoopie pies. YUM! The center is, of course, the best part! :) I lied. The best part of THESE whoopie pies was the fact that the packaging included a napkin tied into the twisty tie. How clever!

I heard there was some broo-hah over the Malamute Rescue and the regular shelter adoption peeps last year, so this year there were not a ton of dogs. In fact, the only dog I saw was when I was alerted by someone that there was a Malamute outside. I grabbed my camera and high-tailed it for the back door. Lookie what I saw: 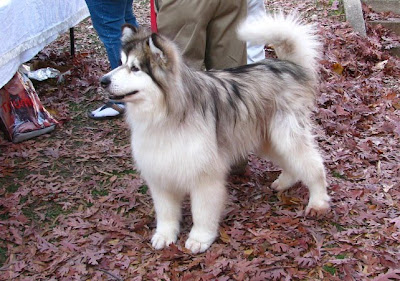 GOR-JUS! Or is that handsome? I forget. This one has longer hair than the ones we saw last year, and he had a name for it, but it escapes me at the moment. Look at those legs! This is the draft horse of the dog world. :)

There was only the one dog, but he was posing for everyone, so I shall now bore you with different shots of the same dog: 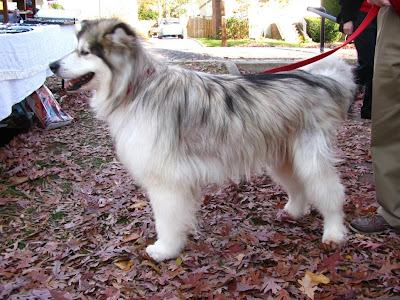 (These next ones were taken with my phone - bad resolution. Sorry.) 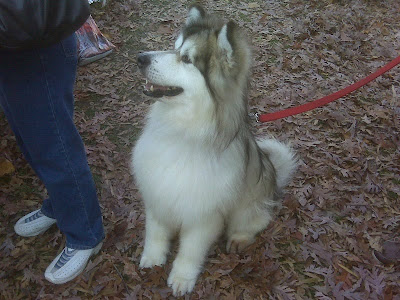 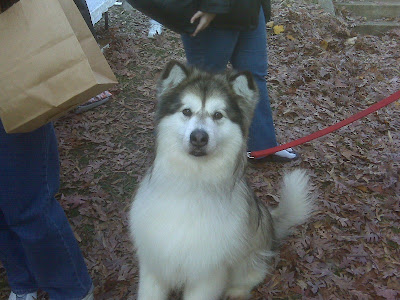 As my Mom used to say about our 3/4 Timber Wolf + 1/4 Husky (another GOR-JUS animal), "When you look into those eyes, there's someone home."

If you'd like to see more Malamute pics, or a pic of the building we were in, you can look back at last year's post. But COME BACK! PLEASE!

After a while, I walked around and one of the tables was a retail store with cat & dog stuff (surprise!)... Look at this kitty toy I got: 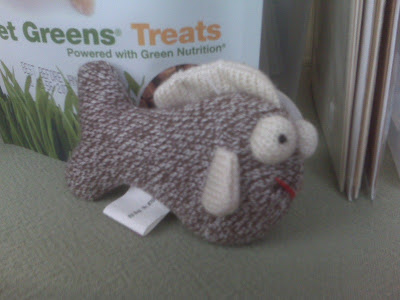 HAHAHAHA! So stinkin' cute! When I gave it to kitty when I got home, she played with it for all of 36 second. Ptththt. Ingrate.

Sales for the show were VERY good. I felt mobbed most of the time, and people walked around with fists full of cards (they always came back to pay me). Sweet! The bad thing is they cleaned out my spinner racks and since I have a HUGE show the first weekend of December, guess what I'll be doing all this week and the whole 4-day weekend*? STAMPING! Yes, of course. And I will bombard you with another Thanksgiving Marathon like I did last year.

In other news, I plan to take a Stamping Marathon break on Saturday and head up to Baltimore to visit one of my Tweeps, Patti Monkey, who is participating in the AVAM (American Visionary Arts Museum) BAZAART Craft Show. I'll be sure to take pics again this year.

That's all! Thanks for stopping by!

*No, I don't GET a 4-day weekend... I had to MAKE it a 4-day weekend by taking a vacation day Friday. Normally I think that is the best day of the year to work, because no one else is around to bug you, and you get all sorts of caught up, but I've become slovenly in my old age, and I like being lazy better.
Posted by Leslie Hanna at 7:30 PM