Happy Thanksgiving to all my US readers! I hope you have survived the embarrassing overabundance of food and did not get too crazy. My Thanksgiving was subdued, as always, being a family of one. I can do whatever I want, and the past few years I've done a mini-Thanksgiving - boneless turkey breast, stuffing, green beans (no casserole), baked sweet potato, homemade cranberry sauce, and pumpkin pie. This year went pretty well, except my timing was off.

It all started last week when I thought to buy the fixins. I got a frozen boneless turkey breast along with all the other stuff, and when I got home, I put it in a bowl in the refrigerator. I was not thinking. So the frozen boneless turkey breast was thawed on Sunday, and had to be cooked on Sunday. Well, one less thing to do today, right? So that was out of the way.

I spent today cooking one dish at a time, then nibbling on it while I cooked the next one. Let's just say that by late afternoon, I was no longer hungry, and had consumed enough nibbled bits to constitute a meal had it all been consumed at the same time.

I also made some Crack & Cheese, and had a spoon of it (or two) before I decided it was time for my mini pumpkin pie for dessert. My meal was over before it was even a meal! And I have enough food left over to get me through the next week.

So what did I do the rest of the day? I stamped, of course! My planned Thanksgiving Weekend Marathon is off to a slow start, but it has started.

First thing I did was make more of my "Guilt cards": 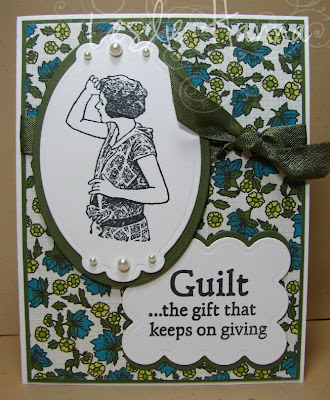 You'll notice (or maybe you won't) that these were stamped on white instead of vanilla (my last batch was vanilla). Truth be told, these were the first ones I stamped before I realized they should have been done on vanilla. THIS, people, is how a UFO pile comes into being.

Seeing as how I needed to use these white pieces, I chose a piece of patterned paper with a white background instead of vanilla. I cut this piece into 6 pieces plus a scrap left over, and made three of that Guilt card above, then three of the "Don't judge me" cards below: 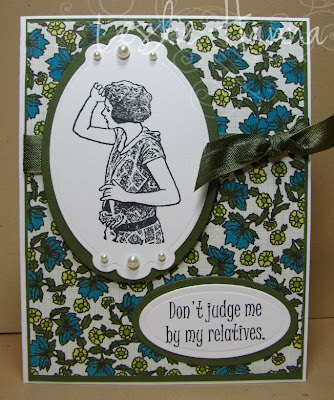 The layers are Artichoke, as is the seam binding ribbon. That stuff is so thin and ties so nicely! (Note to self: hoard before the Holiday mini ends in December...)

Six cards - not a bad start. Then, as I scanned through my "OMG, YOU MUST CASE THIS CARD" file, I saw this one and decided that even though my mission* was to replenish my birthday and irreverent card sections, I could make some more holiday cards along the way.

Being a rebel, and also not owning the stamp set she used, I made this version instead: 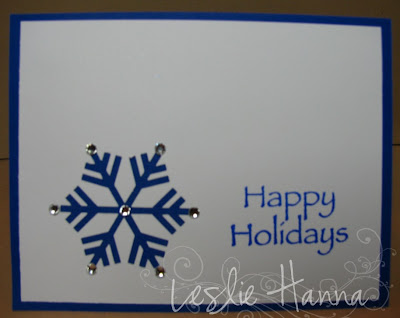 So first I tried this: 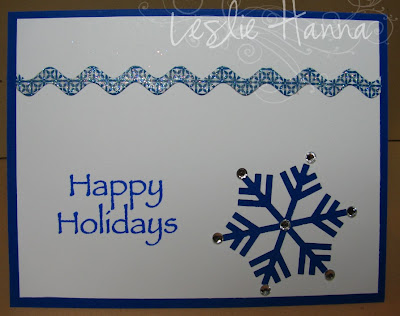 I tried a scalloped order: 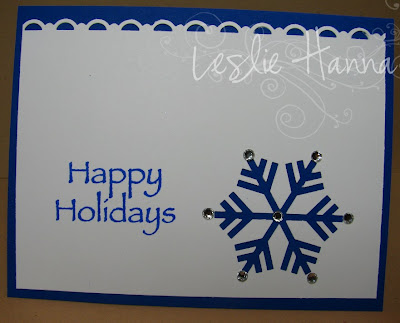 Better, but not great.

Then I had a hair-brained idea to emboss the background! Yeah - I AM SO SMART: 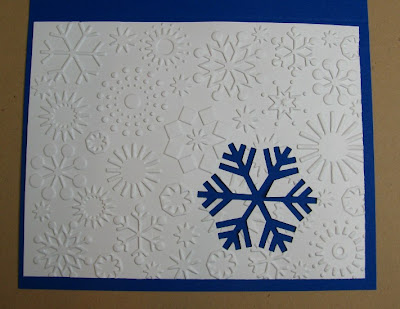 Doofus - how can I stamp the sentiment on an embossed background? Pththt.

For giggles, I tried to scallop punch the top edge: 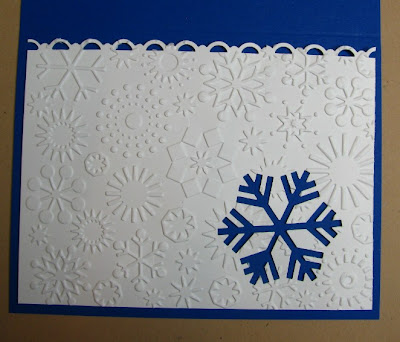 Needless to say, I put all of these aside and moved on to another project that I also failed to accomplish. I'll show you that one tomorrow.

Oh, and I had to take the wine out of the fridge to make room for the vat of Crack & Cheese, so it will be a happy night here at the Crooked Pad. Oh, the suffering.

*mission. Back at my first job working for the Buick Division of General Motors, some younger-than-me whippersnappers came around to our cubes with clipboards. When we quizzed them on what they wanted and when were they going to stop bothering us, one of them said "It is our mission to inventory all the computer equipment." When we picked ourselves up off the floor and wiped the tears of hysteria from our eyes, we let them pass. I guess the phrase has stuck in my brain since then.
Posted by Leslie Hanna at 8:37 PM