I had a craft show yesterday, so I thought I'd document some of the set-up and break-down, and also some highlights of other people's crafty stuff.

The best part about setting up for this show is we get to do it the night before. This is a fantastic option for people like me who lack a Sherpa or a roadie and have to do it all themselves. Yes, I am whining. This year they had some local Middle School kids to help us drag stuff from the car to the assigned space, which was sweet, and probably the only reason I wasn't comatose when I got back home Friday night.

This is what my space looked like after we'd unloaded the car: 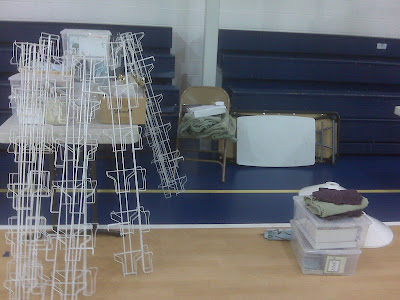 That table on the left (piled high) was provided. I also brought a few of my own to add to the mix. I'd left some parts of the card racks at home, so I couldn't attach the rack sections. This is how much I got done before I left Friday night: 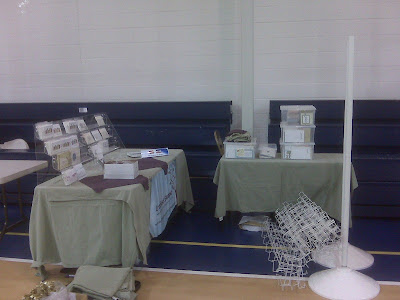 I had much left to do Saturday morning. I overslept, too, so I didn't have time to get petrol (I was on fumes, with fingers crossed) or breakfast on my way over. The show started at 9:00 am, and I got there a little before 8:00. Yikes!

Here's the space after I was mostly set up: 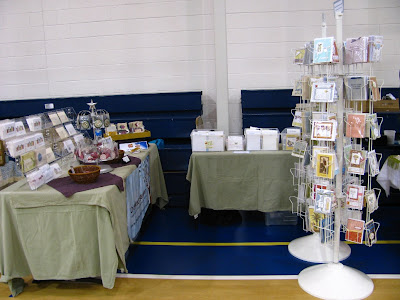 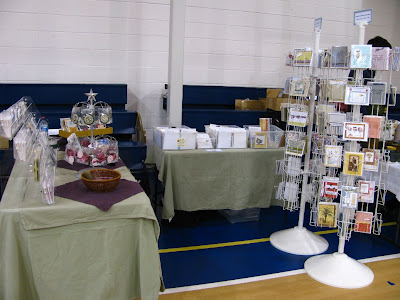 Yeah, I probably should have brought at least one wall section to block the bleechers in the back, but ... whatever. Can you tell I was losing enthusiasm for this gig? 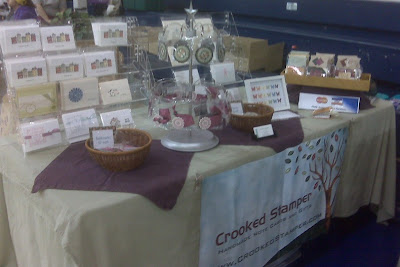 Through-out the day, I got to see this woman across from me wearing a sparkly red "shrug". Here's the front: 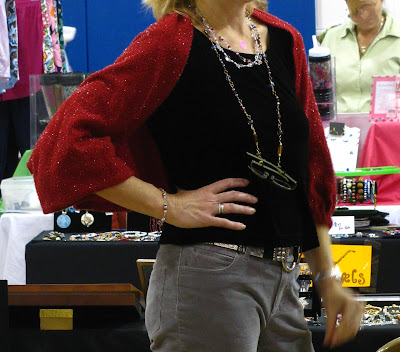 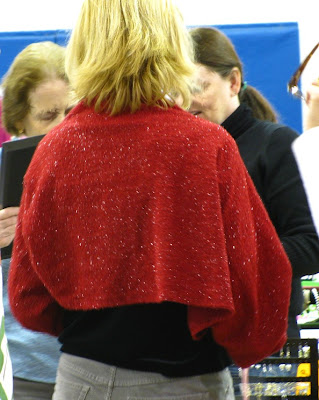 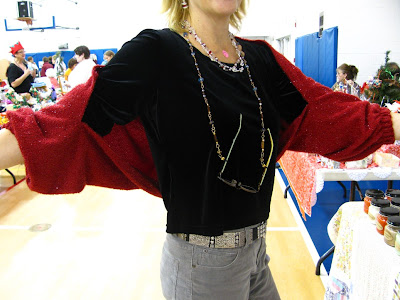 (I want her waist and hips.) Did you notice the price tag on her throat? :) The shrug was for sale, as well as the jewelry. :)

One customer (of mine!) stopped by with this little bag she'd won in a door prize: 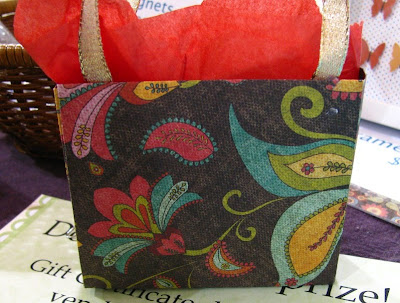 ... and she wanted something small to fit into it, so she bought one of these: 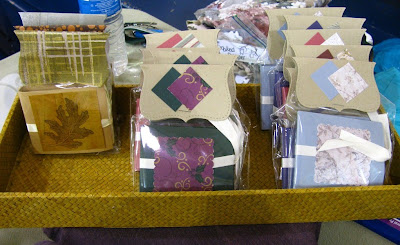 These are my Tea Bag Holders left over from last year, though I did replace all the innards of tea bags and chocolates. These actually sold pretty well over-all. I think I sold about half of what I brought.

Sales were pretty good for me, even though traffic was a little slow. The best part of doing the same show year after year is: repeat customers. I really like when people say they bought from me last year and had looked for me specifically this year. One woman came by on a mission for a neighbor who couldn't make the show, and wanted her friend to pick up my business card. Isn't that sweet? It made me feel sooo good. :)

One of the crafters in my aisle makes these jig-saw puzzles: 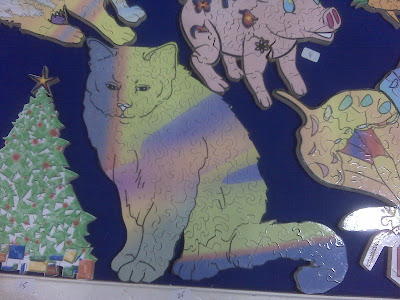 How fun are these?! If you're careful, you can pick up the whole piece! Here's a few more of his creations: 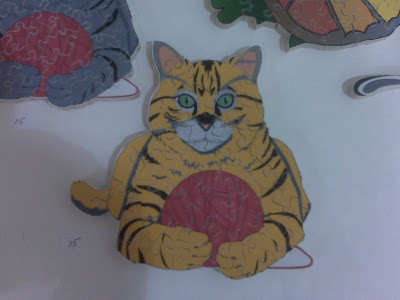 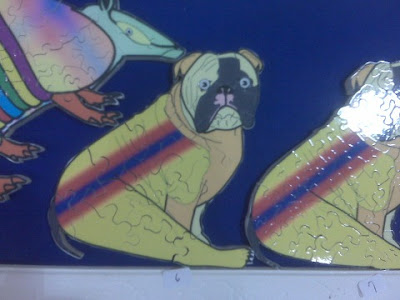 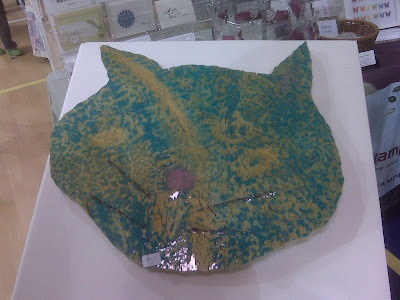 At the end of the day, having spent money on nothing but coffee and donuts and cookies and hot dogs, I broke down and bought this: 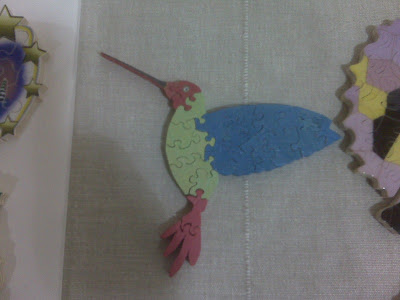 I'm going to try and figure out a way to put it on sticky paper and frame it. :)

At 3:00, while other people were hustling to pack up and play bumper-cars at the curb, I moved in slow motion until my space looked like this: 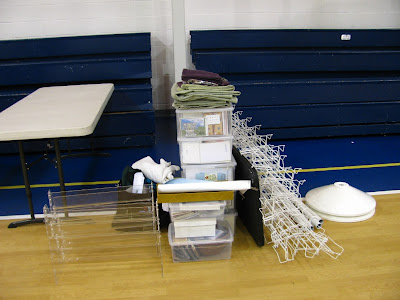 By then, all of the other people were gone, and I brought my car down to load it back up. Too bad all those Middle School kids weren't around, because I was one sore & tired pup! I got home, took a hot shower, then took a hot bath, then went to bed and lay on a back-sized hot water bottle. Ow. I could barely move. I felt only slightly better this morning. I'm too old for this stuff. (Sorry if I'm repeating myself.)

On the way home last night, I gave serious consideration to not doing any more craft shows. Maybe take next year off. Maybe skip next WEEK. Maybe not get approved for the Dec show.

I'd still do my May-Nov farmers markets, and I'd not miss any of them by doing shows. Instead of all the manual labor, I'd still make all the cards, but instead I'd stock my Etsy store and promote the heck out of it. I'd definitely miss the interaction with people, which is my favorite part of doing these shows, but without that roadie, I dunno.

In other news, I'm dropping off all my remaining retired SU stamp sets at my LSS today, and hopefully not doing a whole lot of shopping while I'm there. Yeah, right.

Oh, and my booth neighbor had a clever idea for me to expand my offerings and still have everything fit in my car. After I get my act together this week, I'll try and make one for next weekend's craft show. (If I do the show at all... still contemplating bailing, though it WAS a good show for me last year, even if it IS in VA.)

Time to shower, then make a list of all the stamp sets I'll be donating.

Thanks for stopping by!
Posted by Leslie Hanna at 9:46 AM