My Mom grew up in Brooklyn, but it wasn't until she got married, moved away, and went back for a visit that she saw the Statue of Liberty. I think a lot of us are like that to some extent. I live outside of DC, but I rarely go into town. It's always there, you know? And I certainly haven't been to all the museums. Not even close. But I do know where the big & famous stuff is, and the basic layout of The National Mall (Capitol on one end, Lincoln Memorial on the other end, Washington Monument in the middle), so I at least know which direction to walk when meeting people.

When my cousin from NYC told me she was coming to town for the Rally for Sanity this past weekend and wanted to meet up, I said YES! Then, of course, I panicked. Rally = crowds, and I detest crowds. Um .... Well, we were meeting after the rally, so maybe the crowds would have dissipated some ... And then there's that whole Photo Op thing. I am, after all, a blogger, right?!?! :) Really, how awful could it be? Pththt.

We'd planned to meet around 4-ish by the Lincoln Memorial. NO PROBLEM. I'll just take the Metro (train) to Metro Center and walk to the right.

HAHAHAHAHAHA! Ahem. My first clue of trouble brewing was the mob scene at my end-of-the-line Metro station made by the sardine can spewing forth masses of humans. Thank goodness I was headed in the other direction. {cue the clueless music}

I got off the train about an hour later at Metro Center, exited the station as far West as I could (the bigger street number), and started walking. After two blocks I ran into the Treasury building, which I happen to know is on 15th St. Now which way to turn?

Oh, this was too easy! Looking left, this is what I saw:

Right smack dab in the middle of The Mall. I turned left and walked towards the beacon: 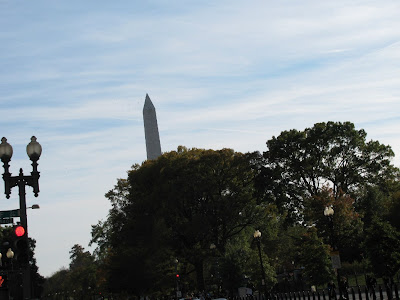 I immediately remembered why this intersection was familiar. Look what lives here: 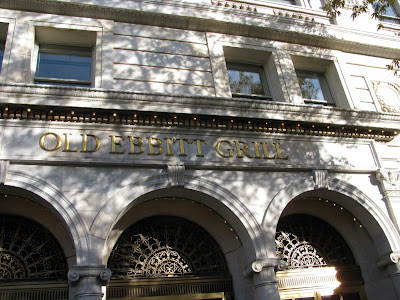 Old Ebbitt Grill. If you are ever in DC, please plan to have dinner there at least once. FAB!

When I got to the end of the block, I took this shot of the front of the Treasury building: 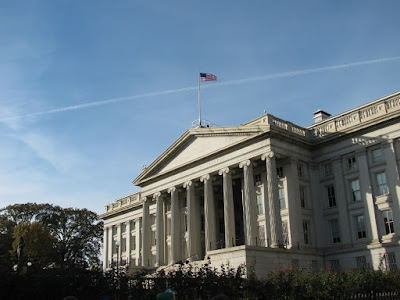 I then made the mistake of following the crowd around the path that I knew took us to the front of the White House. I am used to being stopped in traffic around here, but IN MY CAR, NOT ON FOOT! (Yes, I am YELLING!) Imports. All imports for the rally, and they HAD to take a pic of the White House ALL AT THE SAME TIME. Sigh.

Speaking of imports, these two guys were right in front of me:

HA! Oh, Canada! Since I'd stood in that freakin' line of people for so long, I did my duty and held my camera over my head and took pics. This is how far away we were: 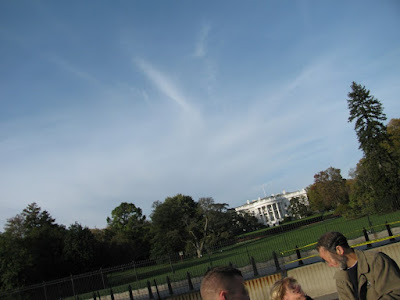 (I obliterated those faces with GIMP - they were not zombies...) 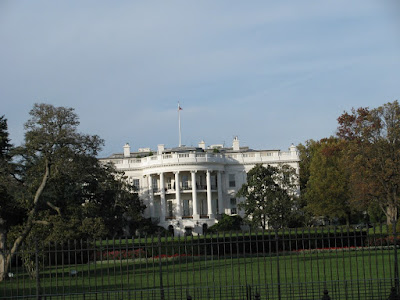 There is a flag flying atop the White House, so the Prez is in residence (as opposed to out of town).

Speaking of zombies, lookie what we have here: 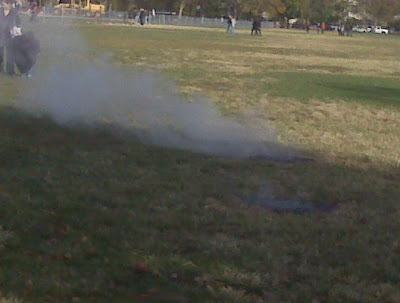 Steam rising from the earth! Very cool. Or maybe it was hot. Who knows. 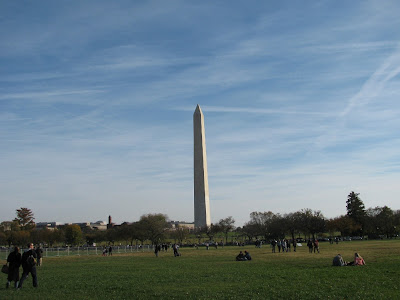 Notice that little castle-like building in this next shot? --> 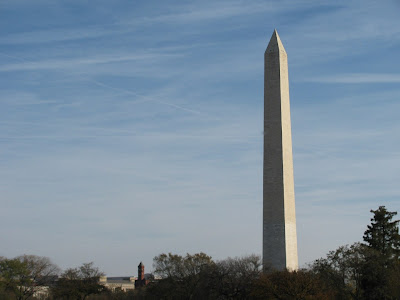 That's the tower on the Smithsonian "castle", one of the many Smithsonian museums. Some people mistake it for THE Smithsonian, but it's not. 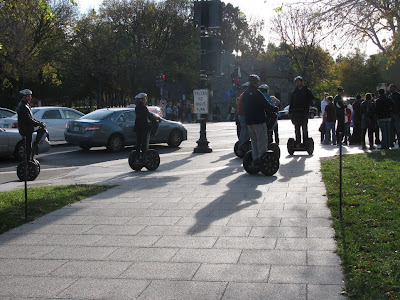 Before I crossed Constitution Ave, I took a pic of this building: 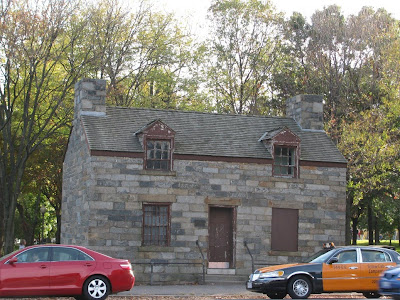 I am one of those people that will make you divorce me before we're even dating when it comes to historical buildings and signage. I stop for ALL of them. Makes my kids nuts. But in all the years I've lived here, I've always driven past this thing and never knew what it was, so Saturday I found out! 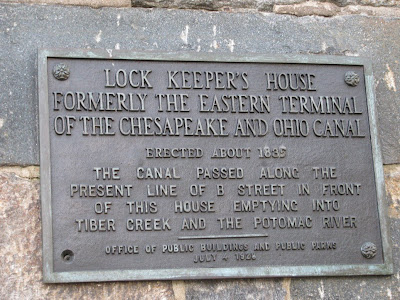 We have a canal that runs from Georgetown (DC) to Western Maryland - 187 miles of one-lane dirt road. It was formerly a tow path for donkeys pulling the barges, but now it's a National Park. The canal now ends in Georgetown, but apparently it used to end here. I've learned something new! Woo-hoo!

By this time my cousin and I were doing the "do you see the ..." thing via cell phone, and we finally met RIGHT HERE! 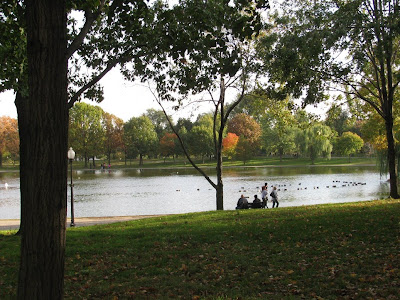 OMG, this place was gorgeous, and it's right in the middle of The Mall! See?! I had no clue! According to this map, this is Constitution Gardens. Now I know! 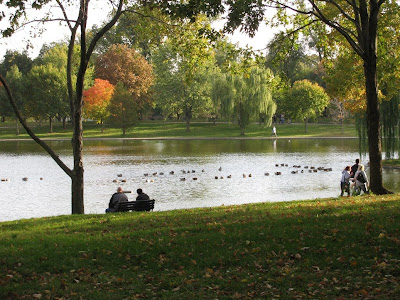 I call these my "lucky shots" because I could never take anything this good if I tried.

We sat on a bench and chatted until we needed to leave to get them to their train back to NYC. But I HAD to take a pic of the T-shirt: 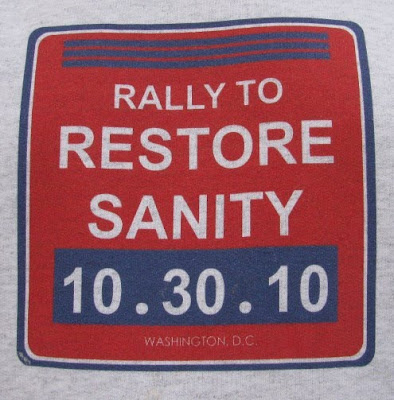 It's a little wavy because someone was wearing it! :)

One last shot before we left: 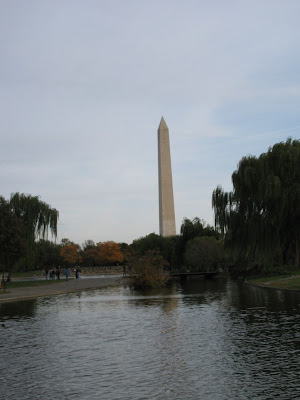 Then the fun began. We made it back to Metro Center station. They headed to Union Station to catch their train, and I went to the other side of the platform for the trains headed in the other direction. Me and 150,000 other people. DEAR GOD! It was like sardines packed onto the platform. It took 4 trains before I made it to the front of the heap and got on the next one. Then, in the train, people were packed like sardines. THIS is why I don't go to stuff like this weekend's rally. People arrive all day long, but they all leave at the same time. It took me an hour to get there and 2 hours to get back. Ugh.

Am I glad I went? Oh, yes! Did I crash and burn when I got home? Oh, yes! Will I ever do it again? Depends who I'm meeting. Probably NOT on a rally day!

By the way - my cousin had something going on in NY on Sunday, or they would have stayed over to make this all a bit easier. HOWEVER, the Marine Corps Marathon was Sunday morning, so we were doomed anyway.

Hey, at least I got to hug my cousin and also got some decent pics out of the deal.

In other news, I actually made a card last night, so I'll post that tomorrow.

Thanks for stopping by!
Posted by Leslie Hanna at 6:44 PM