I Got A Clue

Just to show you I CAN stamp if I really feel like it, I've made two cards for this weekend's Stamp Camps. Let's take a look, shall we?

First, I attempted to CASE this card, but as usual, mine morphed into my own, so I was merely inspired by the original instead of outright stealing sharing it. She used a PTI set where I used SU's French Foliage. She stamped the whole card front, and truth be told, so did I, but I started hacking at it and ended up with this: 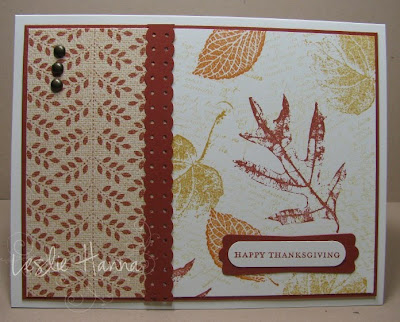 As Stamp Camp cards go, this is a doozie, and I didn't even set out to do that! I actually accomplished several goals with one card! Wanna pull this baby apart? (figuratively, of course) Here was my list of "man, I wish we could ..." things that I've checked off my list:

1. Use the French Foliage set, mostly because I was lured into purchasing it and needed to justify it.
2. Make your own background paper.
3. Use the Autumn Spice DSP while it's still Autumn.
4. Use the Dotted Scallop Ribbon Border punch. I've had that one forever and have yet to manage to work into a project.
5 & BONUS: Because I used a Teeny Tiny Wishes sentiment, and because I always leave out the rest of the stamp sets we use for a project, this can be a Birthday card, an Anniversary card - anything they want it to be! Sweet.

Yes, I am very proud.

Next up, well, I had several ideas in my head and I can't find any of the posts that inspired me*, so I just stumbled along until I got to a point where I felt I should stop adding stuff. But since I took pics along the way, I thought I'd show you the morphing process.

This all started when I was lured into buying (there it is again) the Christmas Collage background stamp. You all know I don't have that collage gene, and not only would this give me "instant collage", I saw parts of this background that could be used separately, like the '25' in the circle. I focused on that circle first: 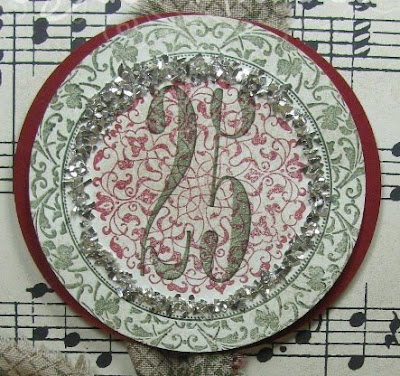 I inked that part of the background stamp with Artichoke, and stamped it on Vanilla. Then I inked up the circle stamp from Artistic Etchings with Cherry Cobbler ink, stamped it off, then stamped it over the '25'. Then I punched it out with the new 2 1/2" Circle punch. Since that's the biggest circle punch we (I) have, I used my old standby method of punching two circles out of a second color and using them as a mat behind the original. I added a line of Mono Multi glue around the edge of the inner circle and sprinkled some Silver Glass Glitter over it.

Then I spent several days futzing with the base. Here's my first version: 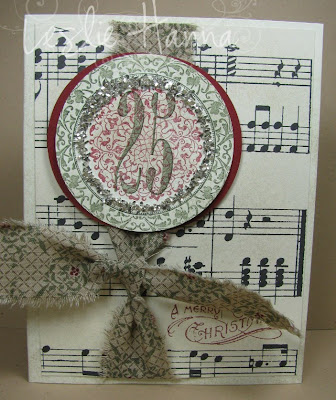 Meh. I was just not feeling the love. I loved the idea of the torn strip of fabric used as ribbon, but I can't for the life of me remember the rest of that card I saw. Instead of using the whole Christmas Collage background stamp for the background, which I'd originally intended doing, I opted instead for this piece of paper from the Newsprint DSP pack. That gave me vanilla-on-vanilla, which could work, but it was too blah, so I sponged Crumb Cake ink all over it to distress it a bit. That's what you see above.

Then I thought I'd sponge some of the Artichoke around the edges instead for more contrast, which gave me this: 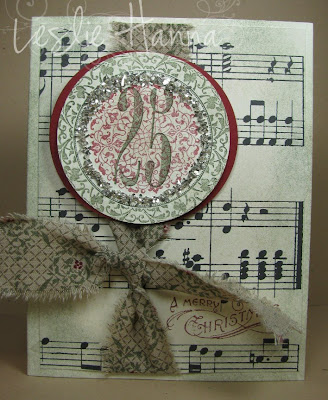 Better, but still not great. So I broke down and added a layer of Artichoke paper behind the music piece: 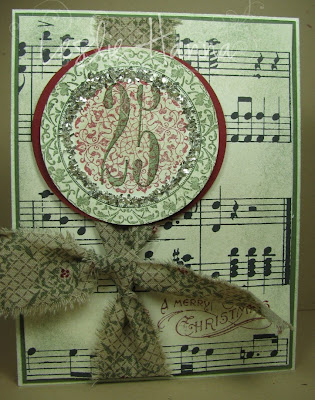 And that's where it sit now. I'm still not overjoyed with it, so if you have any ideas, please let me know! I do think the Champagne glass glitter would look better here than the Silver, but, of course, I didn't buy that one, and paying $20 to expedite a $3.95 item so it's here by Sunday? Not gonna do it.

Did you see the sentiment peeking out from under the fabric bow? Sigh.

Oh, and to top it off, look how I mounted it to the card base: 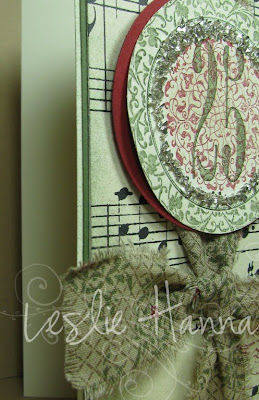 Yep - upside-down. Or is that backwards? Again, I sigh. It's a good thing my customers are used to me presenting serving suggestions that include what NOT to do tips.

I still have one more card to fabricate from thin air before Saturday. I think I'll do another Christmas card. I think. Hey, it's not midnight Saturday night, yet. LOTS of time.

* If any of these idea parts were featured on your blog, please let me know so I can give you credit!
Posted by Leslie Hanna at 7:56 PM