There is much crafty goodness in the house this evening. Last night my Hambo Stamps order arrived, and it's loaded with irreverence. Hambo is one of my go-to places to stock up on new funny or just a little off-center sentiments. Speaking of crooked, lookie what I just made: 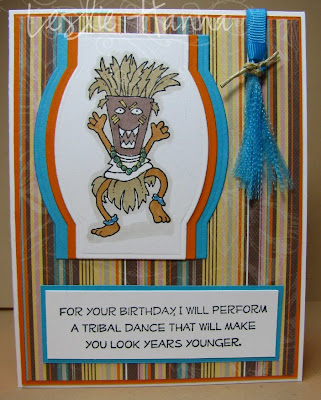 I have coveted this voodoo stamp for ages, and I finally treated myself. I've made "Don't make me get my voodoo doll" cards in the past with a photo I took of my own voo-doo doll (Yes, I have one. Why do you look surprised?), but this stamp image is way more better. I also opted to get this two-part sentiment, the first part of which is on the outside. I actually wanted both parts on the outside, as I don't do insides, but it was not to be. Here's the rest of that sentiment on the inside:

And guess what?! It's crooked! It's die-cut because I'd originally planned to, you know, put it on the outside, but once I'd decided it needed to be on the inside, and knowing how pathetic I am at getting the inside straight (which is why I don't do insides), I felt relieved to see that all I needed to do was stick the pre-cut shape on the inside. I got it crooked anyway. I'll probably re-do this one so I'll sleep tonight.

Oh, and I also found out that Monica, aka: Mrs Hambo, lives in Richmond, which is only 2 hours from here! I smelled a ROAD TRIP! I immediately went to the web site and saw *gasp* a note that said, "This is not a retail location." RATS! I guess that's so people don't just pull up in her driveway and expect to shop or something. You think? :) *waves in the generally Southern direction*

In other news, I got more stampy goodness delivered to my door this evening, but I shall hold off talking about it until I actually use it. A novel concept, I know.

Thanks for stopping by!
Posted by Leslie Hanna at 8:57 PM