FINALLY, I've made another card. I'm still not feeling the love, but maybe that's my missing Vintage gene. Here is the finished project: 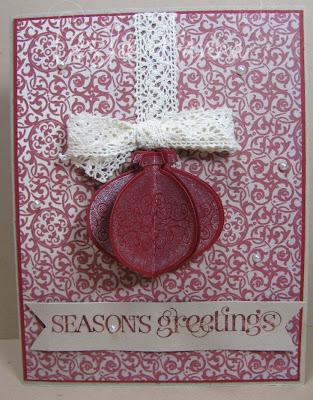 This was the result of a painfully loooong day trying to create SOMEthing - ANYthing. It's tough when you lack the mojo.

Here was my first pass: 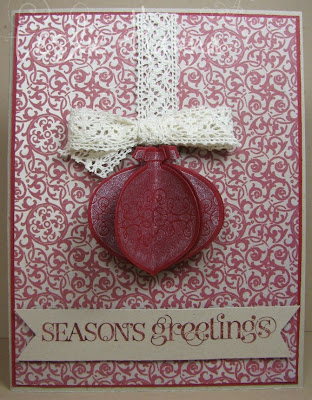 I only used 4 ornament shapes here - one base and three on top. Or maybe it was 6 by this time - one base and 5 on top. (Yes, I am mixing up my word numbers and real numbers. Leave me alone.) It needed more. It needed SOMEthing.

One of my Tweeps suggested bling, but how do you bling a vintage-y card? I had actually tried one of the vintage brads next to the sentiment, but the sentiment juuuust fits the width of the card. No room. Then she suggested the pearls. PERFECT: 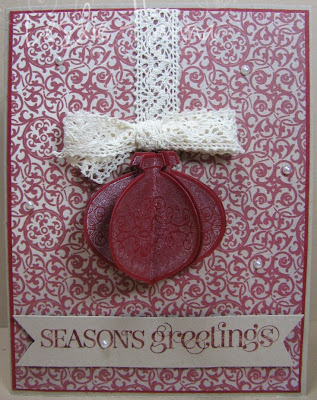 Still missing something. She suggested I pop the sentiment up so it's not flat. It IS popped up. ;( I tried scoring the end to pop it up like a banner, but the sentiment is too long and that effort failed. But I tried forcing it to have waves anyway by sticking pieces of red sticky tape under two spots on the banner. Between that and the Dimensionals, I got this:

You can also see the topography of the rest of the card. The cool thing about that ornament is it will lay flat and fit in an envelope. ;)

Once again, the finished product:

Here you can actually see some of the pearls: 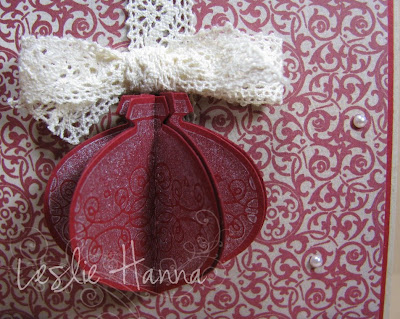 Oh, that's shimmer paint on the ornament. I used the white, but I'll have The Ladies use Champagne. I think it will go better with the Kraft (Crumb Cake) card stock.

In other news, you'll notice this is not a market post. Nope. I played hooky and skipped my last day. I felt yucky all night and didn't get much sleep, plus feeling yucky, I didn't make my poppers last night. PLUS, I am so miserably behind for tomorrow's Stamp Camps, well, it all came together into a perfect storm of "sleep until you wake up". That's my story and I'm sticking to it.

I'm going to get set up for tomorrow and maybe get in some play time later.

Thanks for stopping by!
Posted by Leslie Hanna at 3:42 PM