When I think of anything neon, the 1967 song Neon Rainbow by the Box Tops pops into my mind, and if you listen to this, maybe it will be nice background music for my card: 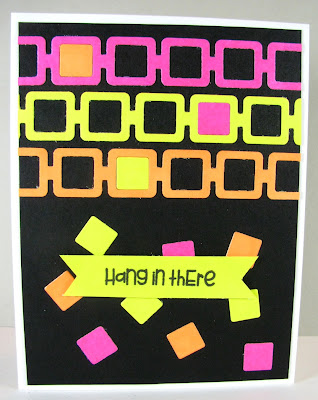 Ah, neon, and yes, I caved and bought the Hero Arts neon inks. Many, many cards in the Blogosphere have attempted to woo me, and none really did until I saw this card made in  this video, and I was doomed. So of course, I needed to CASE her card, but still make it my own. I did the same thing she did with the black background and the direct-to-paper with the three inks, but I die-cut my pieces with my new MFT Retro Squares die (love), and I left off the bling.

I liked the idea of using the insides of the die-cut squares at the bottom of the card to cut all that black, and also to make it look (hopefully) like they are falling, which kinda goes with my Hang In There sentiment from the Paper Smooches Hang Ups set.

I have some of the inked paper left over, so you'll probably see some more of the neon later this weekend. Just a warning. :)

You're welcome for the ear worm, and thanks for stopping by!
Posted by Leslie Hanna at 7:16 PM