When I made the set of cards inspired by Jenny Lawson (aka: The Bloggess), I had another sentiment out on my desk I'd intended to use, but it just didn't work with that exhausted lady image. Later I went back into The Heaplet and grabbed some River Rock DSP, paired it with black, and made this: 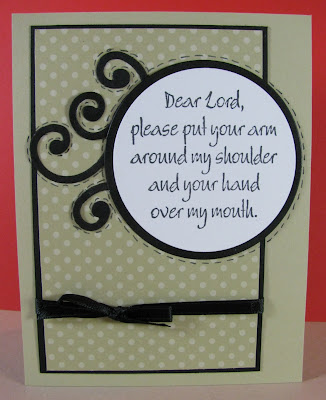 For what could have been a simple card, there's a lot going on here.  I also managed to smear glue everywhere on the card, so it's pretty much toast. Oh, sure, from back here it looks fine, but there is glue all over the black swirls. The faux stitching was my attempt to distract the viewer from the glue, but it failed me. For all you non-stampers out there, this is what is known as pretty trash. Yep, I plan to rip off the back of the card for the Partial Pieces Of Card Stock Collection and toss the rest of it. It's just not worth it.

But I did make another version today: 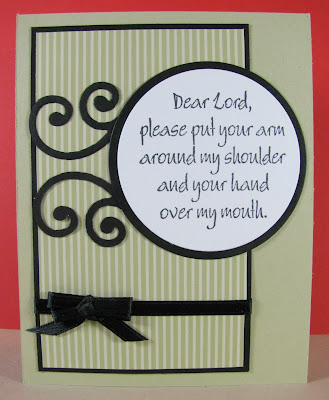 This time I got smart and did a less-fussy version of the swirls, so they were easier to glue down. Now that I look at this, it kindof looks like half a die-cut, but it's not. Underneath the circle are two swirls: 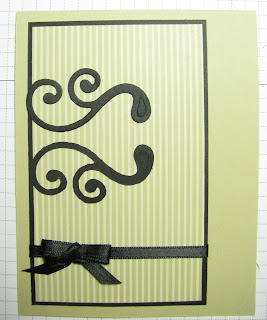 from these two cuts: 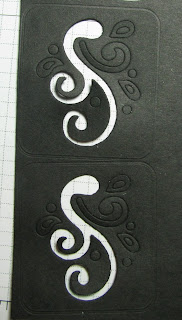 After I'd attached the circle, I considered adding the same faux stitching I used on the first version, but I stopped myself. I still think this second one needs something, but I'm not sure what. Maybe a couple of gems under the circle.

Ah, well, I'm going back in for more. Thanks for stopping by!
Posted by Leslie Hanna at 2:08 PM

Email ThisBlogThis!Share to TwitterShare to FacebookShare to Pinterest
Labels: Inspiration