I'm back with a card for the current Jingle Belles challenge. I've been gone toooo long! This fortnight we are challenged to use red OR green, but not both!

Once again, I was inspired by what was out on my desk. One of the items is a pack of newly acquired Tim Holtz Core'dinations KRAFT CORE NOSTALGIC Colorcore 4.25 X 5.5 Cardstock. That's a lot of words to say "really cool colors of textured card stock with a Kraft core", which may actually be more words, but ... you get the idea. 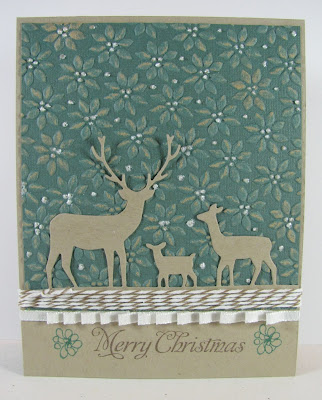 I started out by embossing this really cool green color of card stock with an SU embossing folder. I lightly sanded it to reveal the kraft core on the raised flowers. VERY nice! I hacked off the bottom of it to give me a place to stamp a sentiment, die-cut some Memory Box deer, added some ruffled ribbon, tried to glue down the loops and made a mess, added some twine to fill the gap, stamped the sentiment, and stamped some green things on either side of the sentiment*. Then it got hard.

All along my plan was to apply Opal Liquid Pearls to the raised dots in the center of the flowers and the other dots I'm calling snowflakes. I am liquid-pearls-impaired. :( BUT, on a lighter note, I may have invented a new technique. You see, when I realized I'm liquid-pearls-impaired, I was well on my way to ruining an almost-completed card. I do that all. the. time. I have such pretty trash. But I was determined to save this one.

I did such a poor job of applying the dots, I actually tried to save myself and took a wet wipe to try to wipe them off so I could start over. Well, the pearls came off, but so did some more of the green, which revealed more of the kraft core. Lookie: 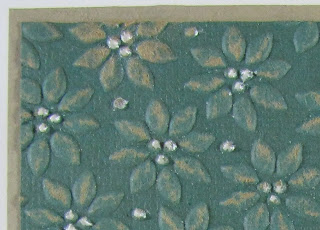 See how that flower at about 11:30 is way kraftier than the others? It got wiped! So I wiped a few more to balance it out and make it look like I meant to do that. So, have I discovered a new technique? :)

One final note: Out of respect for the challenge to use NO RED, since I obviously chose the green option, I removed the piece of red card stock from the back of my ghetto photo studio when I took the photo of the card. It just seemed right.

I'm going back in for a few more cards! Thanks for stopping by!

* Sentiment and flowers are from the Taylored Expressions Peaceful Poinsettia stamp set.
Posted by Leslie Hanna at 4:38 PM