Another DTGD challenge at Splitcoast is to make a scene. I kinda cheated and went into my CASE file for this one. Then I realized several other people had posted similar cards in that challenge's gallery already, but I'm okay with that! Here's my card, then I'll explain: 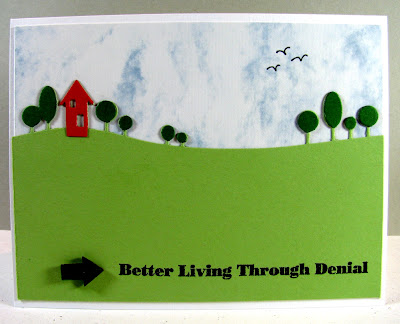 I had a piece of the sky-ish marble paper left in The Heaplet, and now it's on this card. I'm going to miss it when it's all gone. :(

A few obligatory birds, an irreverent sentiment that was new and has now seen ink, and a wood veneer arrow, for emphasis.

There's more challenges on the horizon, and I hope to get to a few of them between loads of laundry. Oh, look, it's 11:45 am. Perhaps I should shower and start my day.

Thanks for stopping by!
Posted by Leslie Hanna at 11:50 AM