When I saw the current Retro Sketch challenge: 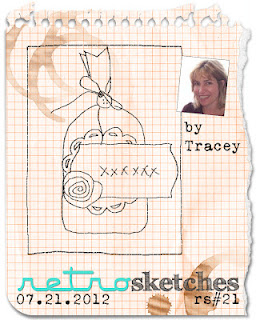 I had an idea of what I wanted to do, so I ran into The Captain's Quarters and changed my mind. Instead of taking a tag from the pile of tags I have out (which was my original idea), I used one of my shaving cream backgrounds to make a tag. Here's the resulting card, then I'll explain: 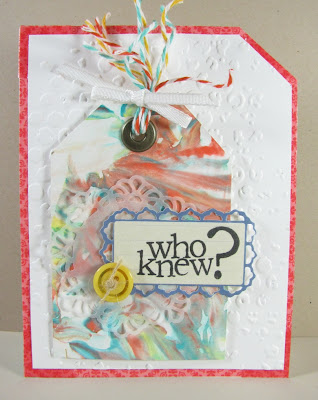 Yeah, it's kinda wild, eh? Then it became a challenge of how much stuff I could use off the top of my desk and not open anything new. I originally had one of my hoarded MS tag doily things on there, but it was so WHITE and it covered up all that shaving creamed color, so I opted to cut one out of a scrap of vellum instead. I used one of my eleventy billion jumbo eyelets for the top of the tag, and tied three different twines through it. I secured them with a piece of white ribbon that I'd cut too long for another card,

Sentiment and rectangle element ... what to do, what to do. Then I remembered my cache of K&Co tags. Each package has 10 each of 4 tag designs for a total of 40 tags, and I have three different packages of them for a total of 120 tags. I decided that blue one would work, so now I have 119.

The sentiment is from a pack of Impression Obsession sentiments I used last night on this card. I like rediscovering all my loot when I clean move things around in the craft room.

I wanted to layer this thing on Poppy, but instead of cutting into another sheet of card stock, I used washi tape to edge the card. At this rate, I might even make a dent in my collection. Hey, a girl can dream.

Now, about that top corner ... um, well, I might have gone too far, but it's done. It's different.

One more thing: that embossed background. I decided the white layer needed texture, and I used one of my Tim Holtz embossing folders. This one comes in a set of two, the other one being honeycomb (aka: hexagons). You'll see that one once I get to the UFO I've created with it.

There you have it! Now all that stuff is on this card and no longer on my desk. Yay!

Thanks for stopping by!
Posted by Leslie Hanna at 5:34 PM