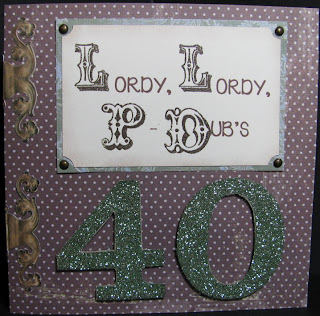 I am a huge fan of The Pioneer Woman (aka: PW, P-Dub), and I like to think I live vicariously through her blog(s). She has a multi-part blog, so it is more like 5 blogs in one. There is just no end to the entertainment!

So as her birthday approached, I decided to make her a card. I mean, like, duuuh, it's what I do, right? And I had a lot of material to work with (with which to work). She is a former girly-girl; married to a rancher; they raise cattle; they host herds of wild mustang(s); she has no Starbucks anywhere close; she has four punks (kids); she shovels manure off her porch, and washes it out of her family's clothing...See? LOTS of material!

I wanted it to look girly, but still kindof Western, so I went with the brown card base and lettering - I printed the words (without the first letters) on the 'puter, then I used my almost-never-used Wild West Alphabet set to stamp the first letters of each word in Versamark, then embossed them with Espresso EP. It is supposed to smell like coffee, but I do not think it did. I tried.

The 40 is made from Sticky Numbers that are part of the Sticky Letter set from SU. They are like the red sticky tape, only shaped like letters and numbers, which makes them perfect candidates for glitter. I stuck the numbers on some cardboard to give them some heft, then cut them out. Then I used the green Fine Cosmo glitter and loaded them up! They came out really sparkly!

The 'hinges' are from a pack of vintage stickers I have. I do not know what came over me, but I thought they looked cool. ;-)

The base of the card is some double-sided card stock from The Stash, and the inside is a pale green, which is pretty much what drove the decision for using the green glitter on the 40. I then commenced to fill the inside with all sorts of things: stamped images of cows and horses; a pooping bull (it had to be done); a coffee cup; and many Happy Birthday rub-ons and stamped sentiments, plus several Thank Yous. I felt the need to thank her for all the entertainment she provides on a daily basis.

Well, I am mid-Clean Sweep here, getting ready for this weekend's workshops. I hope to come up for air shortly. Thanks for stopping by!