It Sure Beats The Beltway

Today, as I was minding my own business and creating stuff, the phone rang. It was BR #2 asking if I wanted to go to Angela's. Well, duuuh, what kind of a questions is that?! Um, Y-E-S!!! So she picked up a Starbuck's for herself, popped on over to retrieve me, and off we went.

Neither of us needed anything, but Angela had just gone through a major inventory and store re-org, so we thought that was a fiiine excuse to check things out for ourselves. We are both easily convinced when the subject is shopping at Angela's.

Now I must begin by saying Angela is a marketing genius. She (formerly) had her space set up so as soon as you walked in the door, you were already grabbing things off the shelves that you simply could not live without, and all this on your way to the counter to pick up a shopping basket so you could get started on your quest. Naturally, #2 and I were looking to see if that magic was still there. It is.

We were both really good, though. Or, as we figured out later, we either already had whatever was on the shelves, or we were just overwhelmed by what we already had that was sitting unused at our respective homes. Either way, we did some damage, but not as bad as we usually do.

One embarassing moment: I am on a Bird kick these days. I blame it all on Lydia over at understandblue, but I think I was headed in that direction anyway, which explains my embarassing moment. Because the store is not 100% re-org'd yet, the critter stamp section was in some baskets awaiting their new wall spot, so I was sitting on the floor, rummaging. I pulled out a few bird stamps that I thought would look good paper-pieced, then I grabbed a box of Hero Arts birds, and I stopped. I already own them! I had completely forgotten! Ugh. So I put all the critter stamps back in their basket and proceeded to check out. I just knew it was time.

As we took the Toll Road back to the Beltway (the locals will know the significance of this) we saw a really ugly spectacle. It looked much like this: 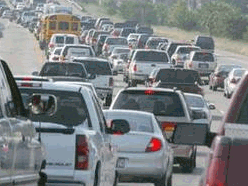 Quite a traffic jam, and it was a Saturday afternoon! One other note: I live through a daily commute in this stuff, and #2 does not. She has NO patience when it comes to traffic like this. Me, I just smile. But I will say that on a Saturday, this is highly unusual.

Given that we had no plans to get into that line, our only option was to go in the opposite direction on the beltway (that would be South, and we live North) and to invoke Plan B, which was to take Rt 7 aaaaaaaall the way West to Leesburg, and take the ferry across the Potomac. The challenge for those who live in this area is there are only a few points where you can cross the Potomac between VA and MD, so we did not have a lot of choices. I knew #2's head would explode sitting on the beltway in that back-up, and I had not been on the ferry in a very long time. So we drove, and drove, and drove, until we got to the road that takes you to White's Ferry on the VA side of the Potomac. That road looks like this: 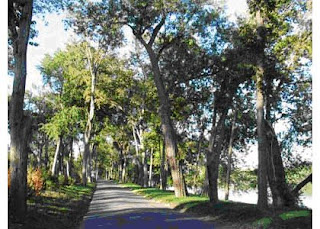 This is actually the last few hundred feet of the road that leads right down to the river, which you can see to the right, through the trees. There are no lines on the pavement, and it is like you have entered a different world. Now compare this to that bumper-to-bumper traffic shot above, and, well, it sure beats the beltway, don't you agree?

(This and the following photo are from: http://www.talkingproud.us/VirginiaPotomacWhitesFerry.html.) 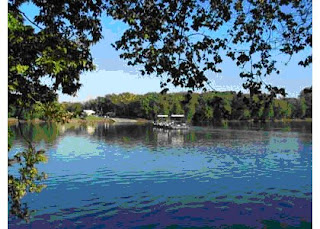 On the Virginia side, this is what it looks like waiting in line for the ferry. That's the ferry taking cars over to MD. It will come back shortly, unload the MD cars and take us on board.

Once you cross the river and exit on the MD side, the ferry road takes you through farm land and a few small towns, and you eventually get to the road that takes you back to civilization.

Yes, it is a little longer distance-wise, but it sure beat sitting in all that traffic.

Now that I am all calm and relaxed from the drive in the country, I think I'll go play with some of my new stuff. I'll be back later to show off anything I manage to create. And no, I have not done my January birthday cards yet. There's lots of time for that. ;-)