It's not that I don't know when to stop, it's just that these papers were OUT and IN PLAIN VIEW, and I NEEDED TO CLEAN so I could GO TO BED last night. As I sat at the table and fondled the remaining scraps of my Basic Grey Archaic papers, I noticed they were all (ALL) 4" long. Whatthe??? Then I started laying them next to each other, admiring how they were each so very busy, but they still worked together side-by-each. Then the lightbulb went off over my head, and it was blinding.

I grabbed a piece of Mellow Moss (from the next-to-the-cutter pile, so it counted as cleaning) and lined up those puppies to cover the front of the cards (I made 2). 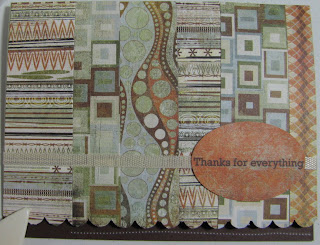 They were 4" long. which left a 1/4" of Mellow Moss peeking out at the bottom. And when I say they were all 4" long, that is a relative statement. They were all about 4" long. C'mon, peeps, look who cut them! So I needed to deal with not only the 1/4" edge, but also the ends of the papers.

What to do, what to do. I tried putting a strip of dark brown along the bottom: blech. Then I thought about scalloping the bottom edge to shorten it and even it up at the same time. After I did that, it looked boring so I put a brown strip on the inside!

See? I do some of my best work under pressure. We Professional Procrastinators are good at that pressure thing. I aslo scalloped the top edge of the brown piece to make it look more, well, I don't know why. Maybe because the scallop punch was out... maybe. I also added that line of rub-on dots from my stack o'SAB rub-ons. Man, do I have a ton of those things left. Thank goodness we do not have rub-ons in this year's SAB catalog. No, this year I'll be stock-piling ribbon and DS paper instead. 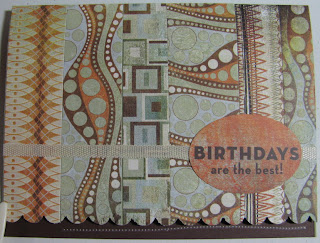 Since the papers are so busy, I tried to cut it a little with ribbon (surprise!), but it was not happenin' for me. Then I realized it needed something horizontal, but not too bold, so I used a piece of ribbon from the 400+ yards of the Outlet stuff I still have, because it is neutral and very subtle. For the sentiments, I used two more of the SU Chit Chat rub-ons, and I put them on a piece of orange from the same Archaic pack. One of these days I may even use up that paper.

When I was done with these two cards, I actually put away the pack of paper and finished the Clean Sweep, after which I crashed. Today's workshops/classes went well. There was no whining and the much-anticipated riot did not materialize. Between the cutting and the PunchFest projects, I thought for sure there'd be an uprising, but all the projects were well-received. I am always pleased when that happens.

Well, no stampin' tonight, or else I'll have to clean up after myself. Knowing the likelihood of that happening, 'tis best to just not start. I think I know me pretty well. ;-)