I spent much of Thursday diligently working on card projects for my upcoming workshops, because I do not want to be doing this next Saturday! It would be such a refreshing change to be ahead of the game ...

I get a lot of inspiration from Splitcoast (aka: SCS), where I lurk on occasion. I mostly check out the new uploads, but once in a while I'll look at a specific gallery, like when a stamp set is retiring, or is still in the box and I need a reason to open it and mount it.

Since the new catalog comes out in a few weeks, I thought I'd use some sets that are retiring, mostly so I can use them, since I have them. My customers have pretty much already bought what they want, so I have no illusions of selling anything based on these projects. Oh, it happens on that rare occasion, but most of my customers come with shopping lists. Really!

These are the three projects I managed to create yesterday, and they may be contenders for next weekend's workshops, or maybe not. 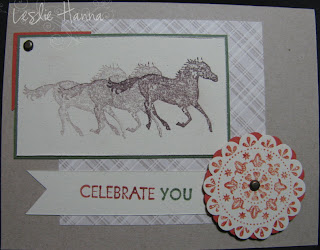 This first one was inspired by this post on SCS. She used the yummy, but retired, Outlaw DS paper, so I had to think of something else to do. I still wanted it to be 'manly', so I used a piece of paper from the Manchester DS pack. It coordinates with Kraft, so I used that as my base. I cut the DS paper on the small-ish side so if I liked the mock-up I knew I'd have enough to go around for everyone.

I distressed the edges of the rectangle with the horses, but I think I'll go back and sponge some Close to Cocoa around the edges, too. Same with the little sentiment banner ... it needs some definition.

Speaking of which, I thought the DS paper looked like it needed some green underneath it...too late! It was stuck down already. Grrr. So I tried this: 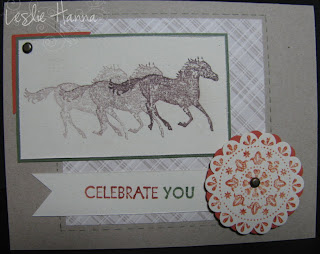 I just added a dashed Artichoke line around the whole rectangle. Eh, a little better. It really does need a green layer. I'll disect it and add some of my Artichoke DS paper under it.

Oh, and I thought this set was retiring, but it is not. The Bronc Buster set is. Drat! Oh, well.


For this next project, I think I am still channeling Lauren. ;-) 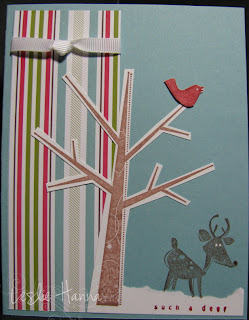 The Moose You set is retiring, and I have not used it much. This card actually started out as a Winter card using the tree and the snowflake stamp. That piece of DS paper was originally larger, and flipped over on its Baja Blue side. Then I thought the tree was too 'white', so I started trimming, and well, you see where I stopped trimming...

I also thought the deer got a little lost on the blue background ... 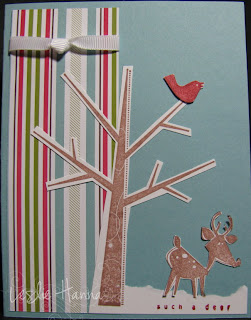 ... so I stamped it again on white and cut it out, and I think it looks better. HowEVER, with all this cutting, The Ladies may revolt, so I'll think on this one some more, too. 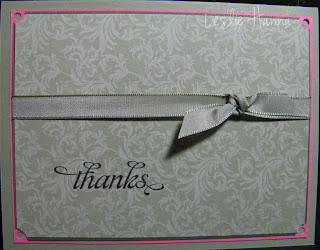 Lastly, we have a card that came together after much searching through my stack o'DS papers. Did you know that the green color in almost all of our DS paper this time is Old Olive? So what, you may ask ... olive is a handsome color, is it not? Why, yes it is! BUT, I was trying to follow a card on SCS (cannot find it right now to link ...) as inspiration, and I wanted to use satin ribbon. The only colors of SU stain ribbon I have on hand are Kraft, a little Basic Gray, and a new spool of Mellow Moss. Mellow Moss does NOT go with Old Olive; thus... my searching.

I finally figured out the Juntos paper from the Spanish catalog uses Mellow Moss, and I have only used two pieces of that paper, so I was saved! I used one of the stamps from the Thank You Kindly set, because I thought it was retiring, but noooooooo, the Thanks For Everything set is retiring. Oh, well, missed it again. Rats! But I do really like this card, except for maybe that pink layer. I got it off the SU color wheel, but I am not feeling the love right now, so I may swap it out for something else.

On another note, I have an entry in my newly renamed Under-appreciated Holiday Challenge: Penguin Awareness Day! She used Origami! Go check it out! I am working on my next Holiday, so stay tuned for that! I think I need to stay a month ahead of the actual month we are in so that I can use my Holiday creations for workshop projects; therefore I'll be doing a new post on the 5th, then on the 19th I'll post one for February. Yikes! I'd best get to work.