At long last, I have finished my 2009 calendar! Actually, it came mostly finished, but pretty nekkid, so I wanted to dress it up a bit. I did January a while ago, but then I put the project aside, and well, I decided that since my little Stamping Group has disbanded so we did not make a 2009 calendar, and The Pioneer Woman did not produce a calendar this year, my wall at work would be pretty empty, so I had to do something drastic. Today I decided to finish the little bugger. 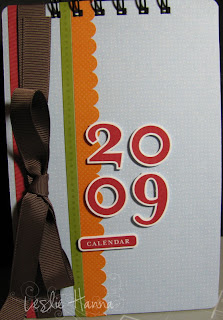 Here's the cover. I mostly followed SU's design as a guide, but I put it on pieces of the SU Chipboard Basics (small) instead so I had front and back covers I could bind. 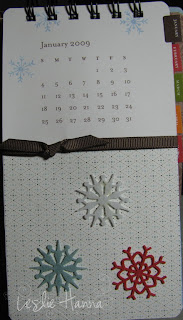 January you've seen before. You'll see I covered up the lines on each page with a piece of DS paper, and covered the top edges of the paper with pieces of coordinating ribbon. This one is brown. I even stamped something on this page. 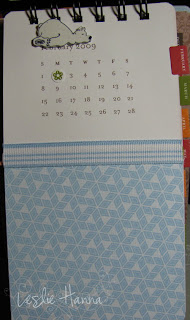 For February, with me still being contrary and refusing to bend to using the traditional holidays, I went with a "it is still cold and so I'll use a polar bear" theme. I popped him up with Dimensionals and made him lay across the month name. He's an image from Rosie's Roadshow. You'll see more Rosie's on some other pages, since, well, you know, they were still out on my table and pretty darned handy. 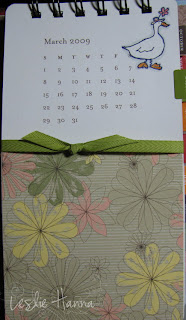 Here is where I began to raid the old stash of retired DS papers. And that's another Rosie's image. March = Spring, so a duck with a flower in her bonnet, well it just had to be done.

Please ignore the fact that I used dye ink, then went around it with a Copic marker so it all kinda ran. 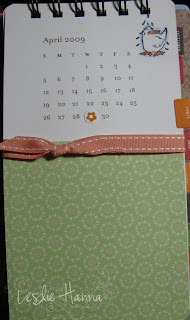 For April, we have more retired DS paper, and another Rosie's duck. This one is being rained on ... April showers ... yeah... 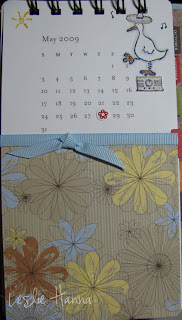 For May: more retired DS paper, and more Rosie's. This one is a duck dancing on a radio while wearing a sombrero. I saw it on a sample Rosie's card a few years ago, and I just had to borrow the idea. 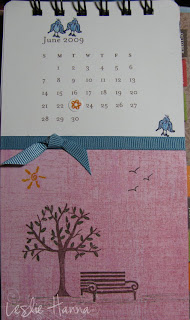 June. What to do for June. How about a park? The tree and bench are A Muse images, and the bird and sun are Rosie's. I colored the birds blue in honor of Lydia over at understandblue, who has me thinking about blue all the time these days. And birds.

Oh, and the birds are a little tilt-y, so we'll just say they've been in Grandma's cough syrup again. 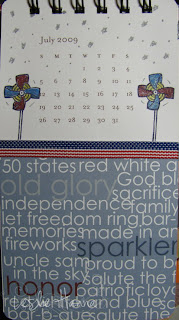 July is only one thing in my mind: a very patriotic month, so it is the one traditional holiday I will use here. I initiated my A Muse pinwheels, and colored them with glitter Gelly pens. Those blobs at the top are supposed to be sparkly stars, or maybe fireworks, or something. Maybe they were a mistake, but whatever they are, they are a permanent part of the page now.

I also used a whole 4" square of some patriotic paper, and 4" of specialty ribbon. At this rate, in another 8 years I'll have used the rest of both of them. 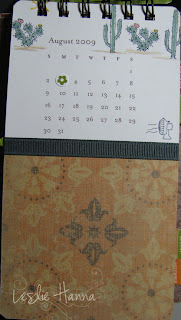 August in DC is traditionally stinkin' hot, so I made a desert with cacti. Hot. And a fan to cool things off a bit. To keep with the hot hot hot theme, I used a piece of some Western Sky paper.

Now that I think about it, I should have made a swamp, because it is hot and humid here, not hot and dry like a desert. Oh, well. 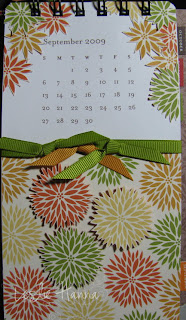 September is the beginning of Autumn, so I used a piece of Haiku paper. And yes, I cut out all of those little pieces of patterns and stuck them on. I even did three whole fleur things and popped them up on top of the DS paper. I am nuts. 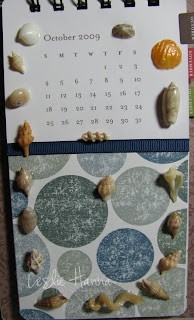 Then we have October. What? YOU do not think of sea shells in October? Well *I* do. I have a 2-week time share in Florida, and for the past 15+ years, I have gone there every October. It's just a ritual. And since I drive down, I am gone for a sweet 2 1/2 weeks. Even at work, I tell people I cannot support them in October, so they'll have to change their plans. Really, I've done that! So in my mind, October = beach.

Okay, this year I did not go, and I think that is why I am out of sorts. Actually, BR #2 usually goes to FL this time of year, too, and she did not go this year either. Yesterday we decided that's why we are both out of sorts.

Also, I personally collected each and every one of those shells. I also cleaned, washed, bleached, washed again, dried and sealed them. I do not buy shells. I just wanted to make that clear. Oh, and if anyone wants some shells, I can supply you with many, many, many. I have plenty. 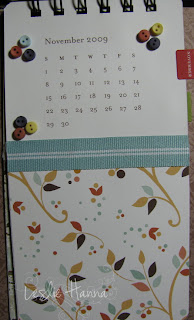 November. This month got some Autumn Vine paper and some lame little buttons that were still out on my table. Can you tell I was getting tired? 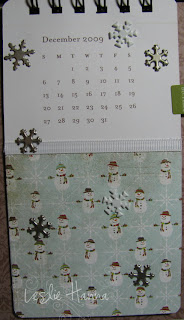 And last, but not least, we have December and some Figgy Pudding paper plus some lonely snow flake brads. I actually finished the silver ones and had to break into the white ones.