I always have the best intentions when I do a challenge. You know, to follow the rules. I start out on the right track, but then inevitably I get distracted, or something doesn't fit quite right, or it looks better in the other direction. You stampers know of which I speak, right?

So tonight I set out to make a card for a contender for next month's Stamp Camps using this sketch: 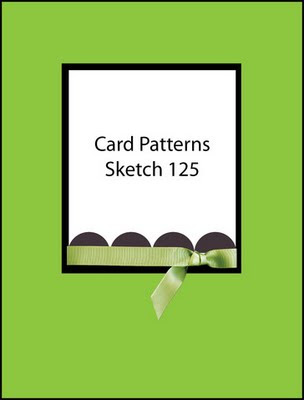 I thought it would be a great way to show The Ladies how to use one of the new triple layer punches as a border. Then I decided to use the Upsy Daisy set for the main image and a sentiment.

That meant it needed to be horizontal, so I flipped it. Then I wanted to emboss the daisies in white and sponge color over it, but it's too hot to use the heat tool, so I scrapped that. Then I thought I'd just use black ink, but remembered the SU black ink doesn't dry fast and permanent enough on our Whisper White, so maybe I could use Staz-On, but we've done that.

While I chewed on that, I decided the Triple Punches were too froo-froo-y for the daisy image, so I needed a plain scallop. I wanted a bigger scallop than the SU border punch, so I punched out a bunch of 3/4" black circles and made a perfect border, except there was space at the bottom between the circles. Sigh.

It was at this point I threw in the towel and used my Memento black for the ink, sponged in the sky (Pumpkin Pie, Calypso Coral & Poppy Parade), and used an MFT scallop border. This is what came out: 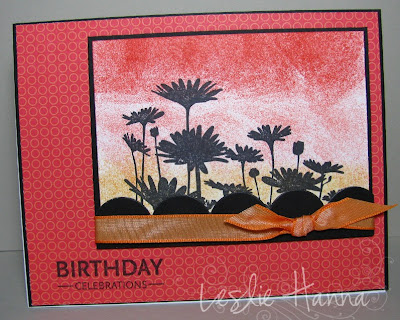 I like it. However, not only does it not work for Stamp Camps (not SU-Only), but I'm not sure it even makes it for the sketch. We'll see if they vote me out or not. I'm okay with that, because I kinda like the result.

Oh, and I'm sorry about the crookedness of this photo. I hope to leave the house tomorrow and get a tripod. You guys are worth it. :)

I'm going back in for more stamping. Thanks for stopping by!
Posted by Leslie Hanna at 7:54 PM