It Takes A Village

I know my photographs are not that great, and I thank you all for continually returning to see what other fuzzy creations I've posted. But even *I* have my limits.

I made several batches of note cards last weekend, and I have tried almost everything I know about photography and lighting and contrast and camera settings (which ain't all that much) to take a pic of the cards, to no avail. I KNOW I've taken pictures of mostly white cards in the past, but for some reason, I have failed all. week. long. I mentioned to someone this evening how interesting it would be if I were to get hit by the proverbial Beer Truck tonight, and they found 85 pictures of boxer shorts on my camera, all out of focus. Yeah, think about that for a second.

So here is an earlier picture I took of just the corner of the card: 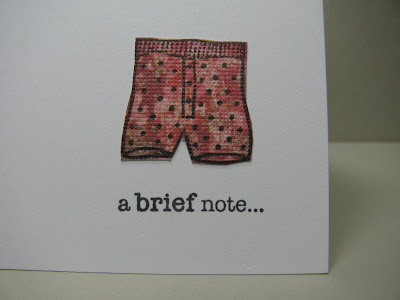 It's mostly in focus. I mean, you can read it, right? By the way, the images are from the A Muse | Studio "Hey, Man" set. I stamped the boxers 5 times on each of three remnants to make three sets of note cards.

Please note that the color of card stock beneath and behind that card corner are Sahara Sand, and apparently it's too light of a color for a mostly white card. No matter what I tried, the pic of the whole front of the card would not focus. I was getting desperate, so I whined to some tweeps and they offered up several suggestions. Being an Analyst, I only ever change one thing at a time, so here we go.

First I tried a darker piece of card stock - Calypso Coral - behind the card, and it was better. Then I tried a piece under it, too, and it was way better, but still had room for improvement. THEN, one of my tweeps suggested I back up FAR to take the photo, then crop it down. Since none of my tweeps have ever (EVER) steered me wrong*, I did as I was told and lookie! Success: 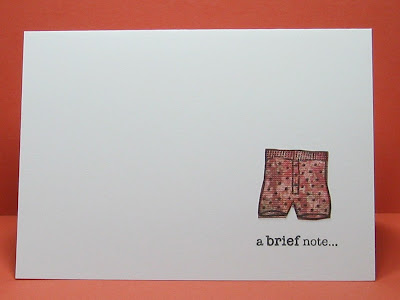 So, yeah, it took a village to get one photo taken for my blog. Sigh. The suffering I do for my craft. People, I'm a card maker. I did NOT sign up to be a card photographer. I did not. And yes, I know there are a squillion tutorials and blogs and instructions and ... I just don't have the mental capacity after the Day Job to retain much more than I already have stored in the grey matter. {end whine}

Now if you'll excuse me, I have 83 fuzzy photos of boxer shorts that need to be deleted from my memory card. And I need to freeze some towels for Saturday. It's gonna be a HOT one!

* One of my tweeps likes carrot juice, a lot, so I tried it. I do not like it, not even a little, but I can tell you it cooks down nicely for a sauce for skillet chicken.
Posted by Leslie Hanna at 7:18 PM