Welcome to another episode of "That is NOT what I intended to make!" wherein I started with a sketch and some other challenges in my grey matter, then did something completely different.

I knew I wanted to start with this week's Waltzingmouse sketch: 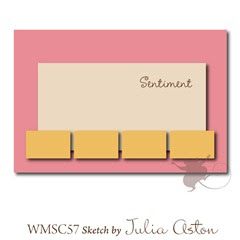 but I also knew I wouldn't be using any Waltzingmouse images, so I wouldn't qualify to enter. Oh, well. But it's a fun sketch, so I persevered. I think the four blocks at the bottom intrigued me, since they break the Rule Of Three. :)

I started with some Basic Grey lauderdale papers from their 6x6 pad: 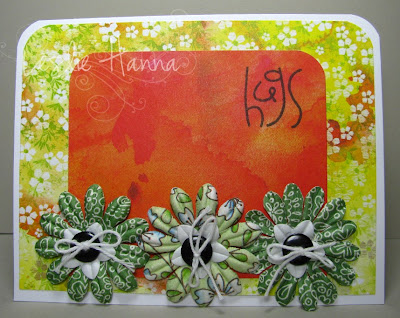 I first grabbed the green piece, then when I noticed the splashes of orange in it, I grabbed the orange piece. I also had this week's Our Creative Corner challenge in my brain: use Black, Bling, Buttons & Bows. I missed that one, too, having not used any bling. But it did make me open and use both my Hero Hues flowers and a package of Recollections (moment of silence) black & white bling, from which I only used some white flowers and some buttons. The white baker's twine is from SU.

You'll notice I only used three flowers, so I was merely inspired by the sketch. I'm pretty sure that's okay, unless part of their plan was to have us break the Rule Of Three, in which case I don't care, since I can't enter the challenge officially anyway, so there. Pfhtfht.

Then I tried again and made this: 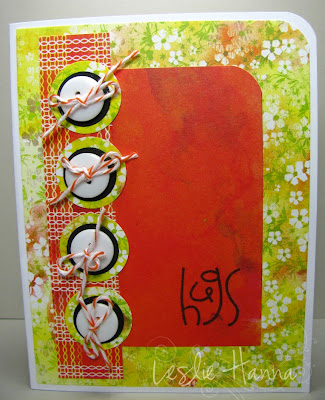 I turned the sketch sideways and used four buttons, which is close to the sketch, but I also added a strip of another lauderdale paper, so I broke it anyway.

I'm so glad to have been inspired by these challenges that I don't really care if I actually enter them or not. :) Hey, I used ORANGE, ON PURPOSE, and I didn't DIE. heh heh

Okay, I'm going back in for more. It's still stupid-hot outside, so I'm calling it a jammies day and I'm crafting.

Thanks for stopping by!
Posted by Leslie Hanna at 10:15 AM