Inspired By The Bloggess

You know how I keep saying, "Inspiration - it's everywhere"? And I've also been whining about my lack of mojo lately, which has manifested itself in a lack of posts here on the ole blog. Yep. Big. black. hole.

But last night, as I was re-reading "Let's Pretend This Never Happened" by Jenny Lawson, aka The Bloggess, I read the following sentence on page 150: "It's exhausting being me. Pretending to be normal is draining and requires amazing amounts of energy ..." at which point I screamed out loud: I HAVE THAT STAMP! I do!!!! So today I made this: 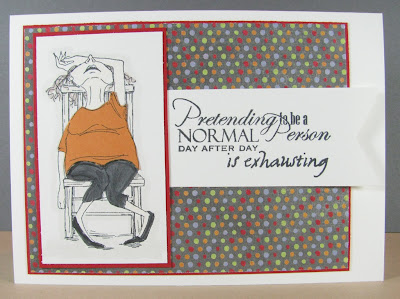 I've had that stamp for several years, and though I've used it a few times, it hasn't seen ink lately. I spent 20 minutes looking for it, assuming I'd put it away since I've been trying to be good these days, but I found it in my "clean these" stamp pile, so apparently not. :/

I actually did color her skin, though she looks ghostly white in these photos. :(  I usually color the chair a dark brown, but I wanted it to kinda blend into the background this time, so I opted for a color that's like old white painted wood. I also paper pieced her shirt, since my coloring skills sukketh so much, and if I'd been thinking clearly, I'd have paper-pieced her pedal-pushers, too. Yes, I said pedal-pushers. That's what we called capris back in the olden days that is now referred to as "mid-century". Back when kids played outside all day and rode bikes on the sidewalks and weren't allowed in the street and our parents didn't worry about us being outside alone. Pedal-pushers were pants that were short enough to pedal a bike and not get your pant legs caught in the chain.

Okay, I'm reeling this back into the present ... I actually made five of these cards, using different papers for the background based on what was in my remnant pile. Also, I need to tell you: these are not A2 cards. Nope. The layers were matted as if they were going to be A2, but the sentiment is too long, and I was forced -- forced, I tell you, to make these non-standard size. I just needed them a tiny bit wider, but that would mean I'd have to make envelopes, and we all know that won't happen any time soon.

Also, another happy accident: when I bought the stamp image, I actually bought it in two sizes, and me being me, I didn't pay attention to the size of either of them. The larger one is perfect for cards, but the tiny one, well, it's never been used before. So today, in honor of not having to make envelopes for these five cards, I actually stamped something on the envelopes. Lookie: 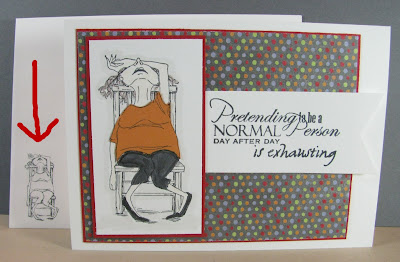 Here you can see the size difference. The tiny one is perfect for the envelope. WIN #2!

Okay, now that this project is off my table I'm going back in to try and tackle some mostly-current challenges. I may even use some more irreverent sentiments. I'm kinda in that mood. :)

PS: I'll figure out the winner of the Spot The Mistake contest and post it later.
Posted by Leslie Hanna at 6:42 PM

Email ThisBlogThis!Share to TwitterShare to FacebookShare to Pinterest
Labels: Inspiration