[If you're looking for the Hambo Blog Hop, click here. Don't forget to comment on the blogs for a chance to win!]

I watched the Stamp Carving class #4 last night, and we made a chevron set. Here's mine: 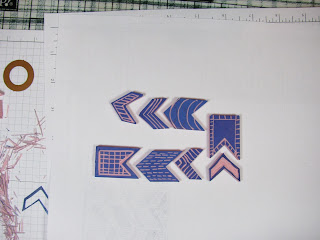 I'm once again embracing the rustic thing I have going on here. I carved all of these in about an hour, so they aren't close to the level of what some of the other students have submitted, but I'm okay with that. I'm not going for perfection - I'm learning and playing and having some fun!

During the lesson, she showed us how to cut the sections at different angles, but I wanted to make them all the same so I had the option of nesting them. I even made several of them the same size to I could just alter the design and mix and match.

Here's the first card I made using them: 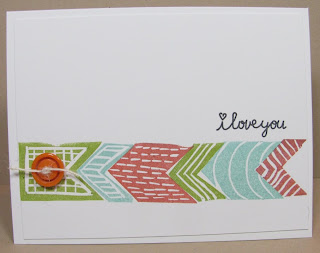 That green banner one on the left is just poorly stamped. You'll see on the next card that edge really is there ... We were supposed to do different designs, and I just knew I wanted to make one checkered - that would be the mis-stamped green banner on the left. You can see there are three smaller pieces - all the same size, and the two larger ones are the same size. The blue one with the curvy lines was made using a circle Nestie as a template for the lines. I was a little tired of all the straight-ish lines on the other pieces.

I made this next card to use the other two stamps I carved: 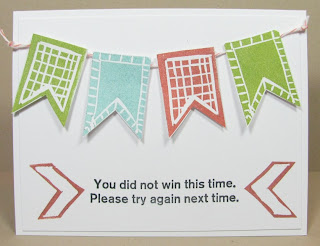 Here I've used the same checkered banner plus one I gave a checkered border and left solid in the center. The chevron on either side of the sentiment was made with my last piece. There, now you've seen them all.

Or have you?  heh heh

One of the stamps Julie made during class was a partial flower, and I just had to try it!  Here is the stamp: 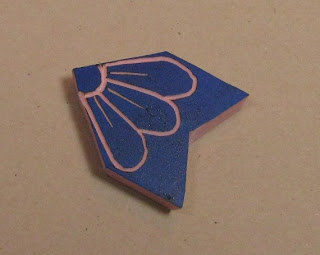 And here is what you can do with it (in theory): 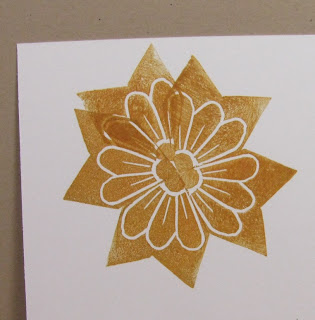 In other news, I have a masso stack of challenges on deck for the weekend, so stay tuned! I'll be back!