So I realized yesterday that my younger son's birthday is this week, and I needed to make him a card. You know how that goes, right? I might have a bazillion birthday cards laying around, but they aren't "special" ... made just for him. I'm convinced this is why I don't send more cards; they all have to be special, and I simply run out of time!

I just made this: 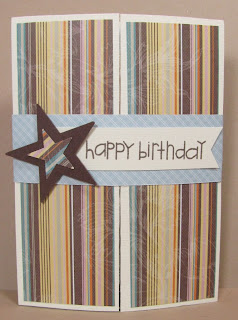 The card is 100% from the stash, including the card base, and yes, I am very proud.  The base has been languishing on my crafty desk for weeks. It's part of an old kit from which I used the parts, but not the bases, both of which were folded textured cream card stock. I've used one of them for sentiments - cut it up without a care, and this one I wanted to use intact.

That's a belly band holding it closed. Here it is open: 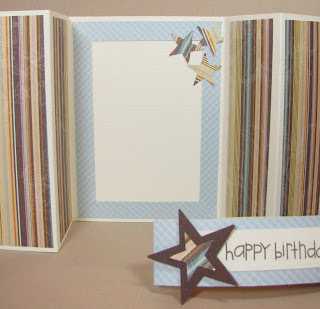 The DSP was in The Heaplet, and it is now mostly gone. (yay) It's two-sided, so I took advantage of that and just used pieces from both sides. I mitered those inside corners myself. (yes, proud, again)   The stars are on purpose, mostly because I totally botched that one corner. I think it looks like I meant to do that. Afterwards, I decided it would have needed something, anyway, so there you go! :D  Since I had the stars on the inside, the belly band decoration was an easy decision.

Okay, I'm going back in for some more!  Thanks for stopping by!
Posted by Leslie Hanna at 10:39 AM