Today started OUT okay. I saw this across the street when I went out this morning to load up the car. 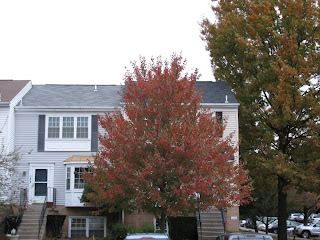 Pretty, huh? Rain or shine, I was determined to go to the market this week, if only to take the ribbing about not going last week. 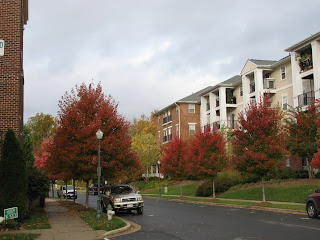 We had a little rain overnight, but nothing was falling from the sky when I arrived. So pretty! I love this time of year!

It stayed mostly windy, except for a bit of what I call 'spit', where it's just a fine mist falling. You know, just enough to coat everything in a spray and make your business cards curl. Fortunately I have my cards in plastic sleeves and boxes, and I just kept wiping them off all day long. 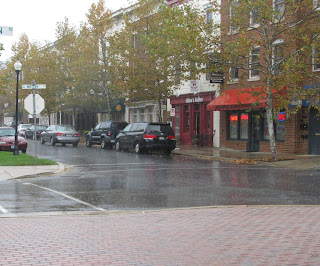 We had a bit of real rain. Enough to collect in Farmer Mike's tent and splash off the ends, which caused no end of entertainment. We are so easily amused.

I got a few since Farmer Mike told me they get twice as dark when they are cooked. I am looking forward to that! 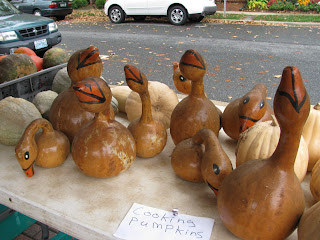 The gaggle of geese. I love these guys! And yeah, yeah, yeah, I know - the sign says "Cooking Pumpkins". Those other things are the cooking pumpkins. And an amazingly large number of people still cook their own instead of buying the canned. 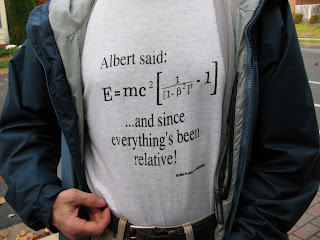 And our Shirt Du Jour. This guy came by as I was snapping pics of Mike's veggies (oh, that sounded bad), and I had to talk to him about it. He is a physicist, and took great pleasure in explaining the equation to me. I thought it was just E=MCsquared, but he proceeded to tell me otherwise. The equation within the brackets tends to be near 1 (or was it zero?). However, it is never exactly 1 (or zero). As mass increases, so does the amount of energy it takes to increase its velocity, so as Beta in the equation approaches 1, the divisor approaches zero, and we all know what happens when you divide by zero, right? He said "it explodes".

To translate for me, since I had not had my coffee yet, he said nothing but light can truly travel at the speed of light. It is a physical impossibility. We can approach it, but never actually achieve it. It's all about that mass & velocity & energy thing. I believed him.

Meanwhile, his wife was shaking her head at me. She said she lives with him and never asks him questions like that because he loves it so much he will talk and talk and talk about it. I guess it's different if you live with the guy than if you just happen upon him at a farmers market. So I asked...it's what I do. 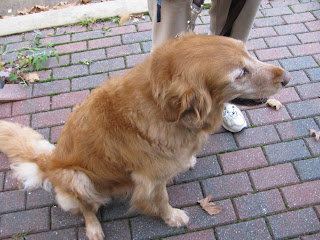 I guess his dog has heard it all before, too. 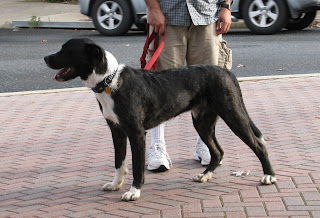 Speaking of dogs, check out this one. What a big boy! Look at those feet! We asked him what it was, and he shook his head and asked us to let him know if we figure it out. Apparently not even their vet is sure. They think it's part Norwegian something (big). And naturally, the dog is a big sweetheart. The guy's wife said the dog does not know he is too big to be a lap dog. 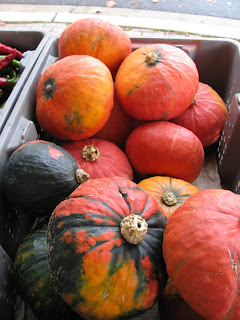 More veggies. These are pretty pumpkins. I think. Or maybe squash. But since pumpkin is squash, either way I am right, right? 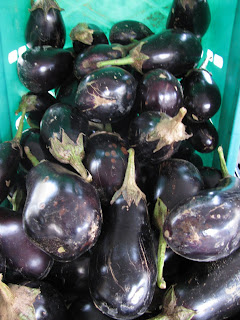 Eggplant. Numbers are dwindling. I took home a few of these to make eggplant fries, which several of my tweeple have made with much success. I think I'll bake mine instead of actually frying them. 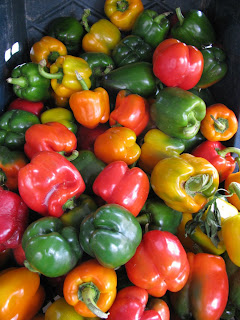 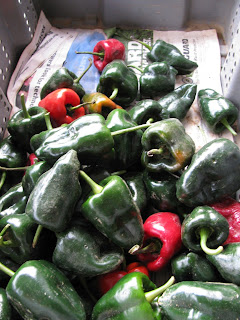 Poblano peppers. Again, small quantity. I took home some of these, too. NOT to make poppers, but to actually stuff like peppers. I combined canned chicken (why I never bought that stuff before this year escapes me) + cream cheese + fajita seasoning. The stuffed peppers were then wrapped in - you guessed it - BACON. OMG, this house smells divine. However, my tummy is not too happy about what I just fed it, so I anticipate another round of nightmares and fitful sleep tonight. I'll never learn. 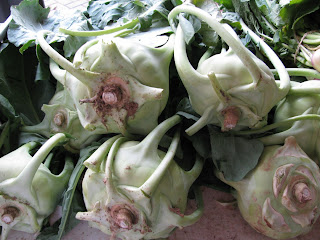 Kohlrabi. Big 'uns! This is a different variety than I bought from the other farmer two weeks ago, and these get BIG. I thought they were huge already, but two different farmers told me, "NOPE, those are SMALL for that variety." Oh, my goodness. 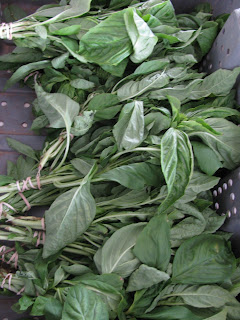 Basil. Unclaimed and unloved. But it smelled oh so good! 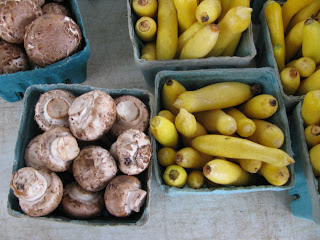 Really small squash. He said people just cut them up and put them in salads.

Then I STAMPED. I did! Lookie: 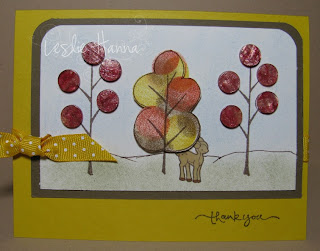 I broke out a new set of Unity stamps (the trees), and I used some of my winnings from a blog contest at Angela's (the round shiny things) to put in the circles on the trees. I stamped the center tree twice and cut one out so I could pop it up. (I have gone through some serious Dimensionals supplies here lately.) I stamped the little deer (from nikoart.etsy.com), then I drew the lines with a brown Memento marker for the 'hills'. I sponged blue for the sky and green for the grass. The yellow base and ribbon are Crushed Curry (SU).

That's it for this evening. I have one or two things waiting in the wings, including a What's This pic for tomorrow. So y'all come back, now, ya hear?

Thanks for stopping by!
Posted by Leslie Hanna at 8:14 PM