During my cleaning and organizing efforts of the past two weeks, I re-discovered two Demo Card Kits I'd purchased, apparently a long time ago. A Card Kit is a pack of pre-cut card stock and embellishments like ribbon and brads to use for workshops to make a pre-designed card. It was open, so I'd made one, hated it, and had a pack of parts-is-parts for 19 cards left over.

So my task Sunday, in between loads of laundry so I could go back to work today (ugh), was to use this kit for other than its intended purpose. You know me - I cannot leave well enough alone, and I've got to change things. 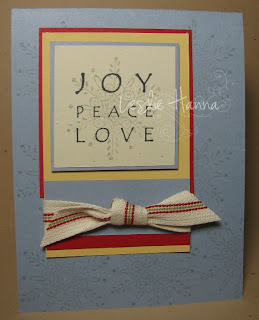 Here is the card I made. It is all SU except for the sentiment, and all from the kit except for the ribbon and layer of Bordering Blue under the white square.

Here is a photo of the original card (it's black & white, sorry) that was supposed to be made from the kit: 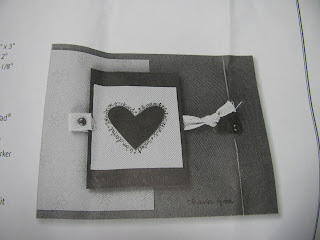 Here is what the kit came with and how I changed it up:

--> The bordering blue card stock base came cut 4 1/4 x 12 so it could fold over the top. I cut off the extra inch and saved it.
--> Naturals White square - no changes.
--> Yellow rectangle - no changes.
--> Red rectangle - I layered this under the yellow and trimmed off a narrow strip to even it out. I saved the strip of red.
--> I did NOT use the twill or hardware that came with the kit. I'll re-purpose those for something else.

I inked a snowflake from the Serene Snowflakes set with Going Grey ink, and I stamped it over the sentiment on the white square and also on the blue card base. I layered the white piece on some Bordering Blue scraps. (yay!)

Since the yellow rectangle was so much longer than the red piece, I took the strip of blue I'd cut off the end of the base and layered it on top of the yellow. I then took the narrow strip of red and put it under the blue piece. Very little waste here!

I used some Holiday twill ribbon (I think from last year?) to tie over the blue strip to tie it all together. I am pretty happy how they came out. I made 19 of these (I KNOW!) - 3 boxes of 5 plus 4 singles. And the best part is that kit is gone!

One kit down, one to go. Let's see what I can cook up next!

Thanks for stopping by!
Posted by Leslie Hanna at 5:00 AM