The current challenge at One Layer Simplicity is to make a one-layer card using a weather theme. I attempted to make it last weekend, but the set I wanted to use was at home. I managed to find a set that was similar that I could borrow. 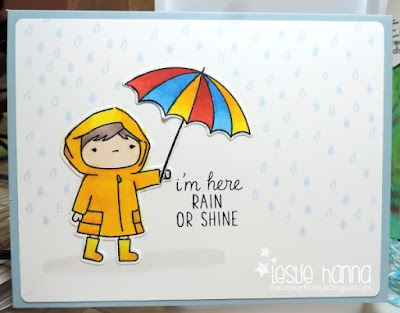 Ignore the layering. Do you see my #FAIL? I die-cut the girl and umbrella. I am such an idiot sometimes. By the time I realized the error of my ways, I'd already colored the die-cut images, so I just kept plugging away and ended up with this card.

You can't tell because of my crack photography skills, but I put Glossy Accents on her boots to make them shiny.

Today I tried again. Now that I'm home, I used the set I'd originally planned to use, and I made this: 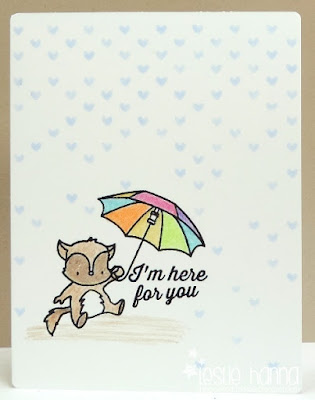 I don't have a tiny raindrop stamp, so I used a heart stencil and colored the hearts with Soft Sky ink and a dauber. The critter and umbrella were colored with Prismacolor pencils and blended with Gamsol.

The sentiment is from an MFT Get Well set. I like the first sentiment better, as it refers to rain (weather), but I think this one works. I don't think I've ever used the MFT set before, and I hacked the sentiment in half so it fit under the umbrella.

I tried to ground the critter, but I think he still looks like he's floating. Oh, well.

I still can't believe I've pulled this off.